Four Worcester parks named among the best in the country 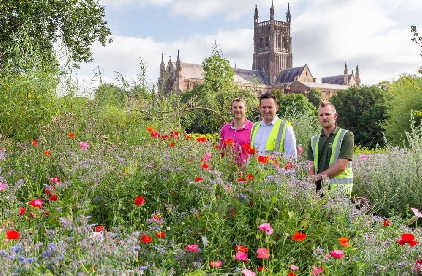 Worcester’s Gheulvelt Park, Cripplegate Park, Fort Royal Park and Riverside Park have all received the prestigious Green Flag Award, in this the scheme’s Silver Jubilee year. The award is the quality mark for parks and green spaces across the UK.

“Over the last eighteen difficult months more people than ever have enjoyed spending time in Worcester’s parks – to exercise, meet up with friends or just relax.  We have all realised how precious our parks and green spaces are,” says Cllr Andy Stafford, Chair of the City Council’s Environment Committee.

“It’s fantastic that four Worcester parks have been awarded the Green Flag in 2021.  I’d like to thank the City Council’s parks teams, whose year-round efforts ensure our green spaces look great, while also maintaining the numerous facilities they offer to a high standard.”

Green Flag Award Scheme Manager Paul Todd added: “I would like to congratulate everyone involved in making these four Worcester parks worthy of a Green Flag Award.”

“To meet the requirements demanded by the scheme is testament to the hard work of the staff and volunteers who do so much to ensure that parks have high standards of horticulture, safety and environmental management and are places that support people to live healthy lives.”

The Green Flag Award scheme, managed by environmental charity Keep Britain Tidy under licence from the Department for Levelling Up, Housing and Communities, recognises and rewards well-managed parks and green spaces, setting the benchmark standard for the management of green spaces across the United Kingdom and around the world.