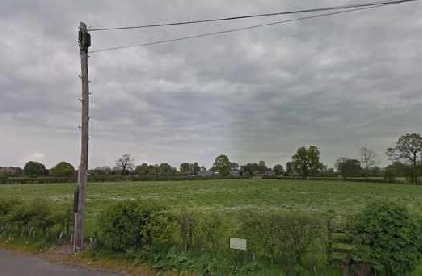 An outline planning application has been lodged with Powys planners to create an electric vehicle charging station on the outskirts of Four Crosses near Llanymynech.

The application has been submitted by Mr Pryce to build a 360 square metre charging station at farmland near near the roundabout with the A483 main road.

Agent, Richard Corbett of Roger Parry and Partners explained in a planning statement that the application is a response to a UK Government policy to stop the sale of new combustion engine vehicles from 2030.

As the application is also in “outline” form the details of the design, scale and other elements that are part of the proposal will be made in a future “reserved matters” planning application.

Mr Corbett said: “The proposal is for an electric vehicle service area to include a drive through.

“The proposal is to be situated in close proximity of the development boundary and can use the existing access to the A483.

“The location of the proposed site has been carefully considered in that the nature of the proposal requires good transport connectivity.”

In February and March, a pre-application consultation was held which saw Four Crosses residents object to the proposals and a petition started up against it.

Since then, tweaks have been made to the proposal which have seen the original plan for a café and shop at the site dropped.

There is also no mention of the number of car parking spaces that would be created.

Mr Corbett said: “The consultation received comments from the community and businesses that a proposed shop and café would deter visitors and locals from the already existing shops.

“In light of these comments we have revised the application and decided a drive through would be better suited to the site.

“At this time only the principle of a parking area along with a drive through is being sought.”

As electric vehicle charging takes much longer than filling a tank with petrol or diesel, the proposal believes that drivers would need workspace facilities and internet connection to allow people to work while charging takes place.

Mr Corbett added: “Research shows that UK drivers lack confidence in electric cars due to the lack of charging facilities, people surveyed they would purchase an electric car if there were more charging points across the country and they were able to access wi-fi and refreshments while their cars charged.”

The site would be situated nearly halfway between Oswestry and Welshpool where the closest charging points are.

Mr Corbett said: “These sites only have a couple of charging point and no option of a drive through or workspace to wait while users charge their vehicles, this clearly show the lack of availability of this use in the area.”

The application will be decided at a future date by Powys County Council.