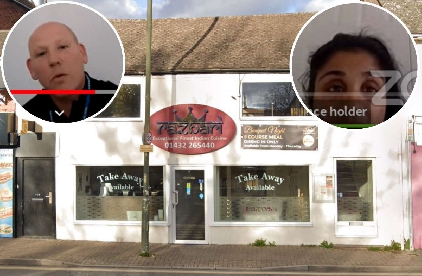 An Indian restaurant in Hereford has had its licence to serve alcohol suspended following a multi-agency swoop which found it employing staff illegally.

Immigration authorities had received intelligence that offences were potentially being committed at the Razbari Indian Restaurant in Eign Street.

In an unannounced visit on October 8, when the restaurant was open but not serving, immigration officers arrested one waiter.

“The licence holder and designated premises supervisor (DPS) Mrs Wahida Khatun was not present, but she also holds a licence for another premises where illegal workers have been found,” PC Lea said.

“This is serious crime, which can attract a sentence of up to five years, and an unlimited fine.”

West Mercia Police had submitted an application, dated yesterday, for an “expedited review” of the premises licence to be heard by the licensing sub-committee within 48 hours.

The application said it believed the waiter “has not being paying UK taxes or insurances, (is) in the UK is as a result of serious criminal activity and is regarded as people smuggling”.

Mrs Khatun said that her husband had transferred the restaurant over to another business “a few months ago”. “Me and my husband are no longer on the lease or managing the restaurant,” she said.

But licensing technical officer Emma Bowell told the committee: “We have had no application to either vary a DPS on the licence, or transfer it to a new licence holder.”

Announcing a suspension of the licence pending further investigation and full review, committee chair Coun Alan Seldon said: “Regardless of who is responsible, the employment of illegal and overstaying people is a crime.”