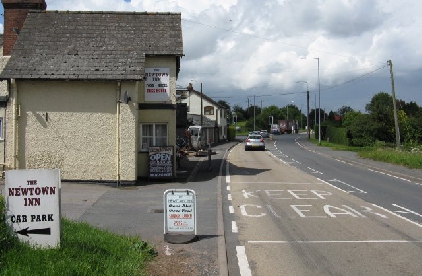 A planning inspector has dismissed an appeal to change the use of a former village pub into a home.

Herefordshire Council rejected the proposals by Charles and Susie Willmott who moved in and converted the Newtown Inn several years ago.

The couple failed to get planning permission to do so. They submitted new plans last year for the former pub in Newtown Cross but these were rejected.

The council felt there was not enough evidence to demonstrate that the pub was not a viable business and could not continue to meet community needs.

They said the Newtown Inn public house has not been appropriately marketed at a price which reflects the business trading circumstances.

Mr Willmott challenged this decision but an inspector has now dismissed their appeal.

“The proposed change of use would result in the loss of a valued community facility and would therefore unacceptably compromise the provision of community facilities in the area,” the inspector said.

Mark Haslam of Herefordshire Campaign for Real Ale, who gave evidence during the hearing, said: “This decision didn’t come as a surprise.

“This is the second appeal the pub-owners have made that has been unsuccessful following refusal of yet another planning application.

“Unfortunately for them, a rather naive scheme to market the pub at an asking price that was more than double what they paid for it failed to pass scrutiny, especially considering they had earlier gutted the pub of all its facilities and equipment.

“It’s now long overdue for them to offer it for sale at a price commensurate with its value as a pub – as opposed to a private dwelling.”