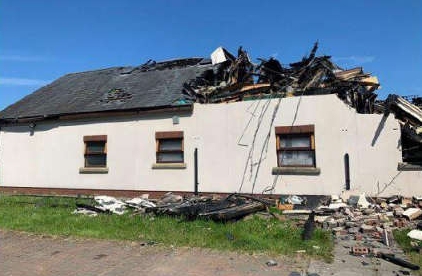 Plans to replace a building at a mental health hospital in Monmouthshire which was destroyed in a fire have been approved by the county council.

It will replace the former Treowen Building, which had to be demolished following a fire in April 2020.

The replacement building will be built on the same site – located between Raglan and Abergavenny – but it will be bigger to accommodate more modern facilities and provide five more beds.

It will also have additional lounges, kitchens, staff offices, clinical areas, a seclusion suite and visitor facilities which the former building did not include.

A design and access statement says the aim is to provide a “high quality and exemplar building” to provide accommodation and facilities meeting standards set by Care Inspectorate Wales.

The new building will be a mixture of single and two-storey, in-keeping with the Teilo Ward development next to it.

It will have a flat roof at a height of around four-metres, and a parapet level of 5.2-metres, making it no higher than the former Treowen Building.

No additional parking will be provided as part of the plans, with the wider site already accommodating 203 spaces.

The wider site is divided across seven wards – including the former Treowen Building – providing 115 beds.

The former Treowen Building was one of three residential buildings built in 2005 in the grounds of Llanarth Court, a former country house built in around 1770.

South Wales Fire and Rescue Service deemed the cause of the fire in April 2020 as ‘accidental.’

A planning decision notice approving the application was issued by Monmouthshire council on Tuesday, October 12.