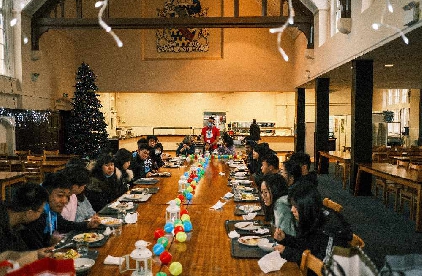 A camp at Haberdashers’ Monmouth Schools, for overseas students who could not travel home during the holidays, has been declared a success.

Despite not being able to spend time with their families, the boys and girls had a fantastic time at the camp.

Run by Connexcel Ltd, the students utilised the outstanding facilities at Haberdashers’ Monmouth Schools to take part in an array of activities ranging from roller skating to playing golf, from knitting to festive paper-cutting, as well as being provided with study support.

Connexcel, which has a base in Newport,  held a similar camp for boarding students at Monmouth during the October half-term and the organisation is flourishing with its expertise in the independent school market.

Monmouth-based Ms Julie Ann Morse, from Connexcel Ltd, said: “We would like to say a big thank you to our team as well as the schools’ staff members who worked hard during the Christmas holidays to help make the camp successful in challenging times.”

“Both organisations share a common desire to support the parents and children. As a family of schools, we are proud to have hosted such a successful Christmas Camp for our students.”