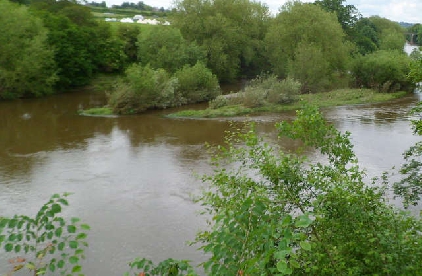 A residents group has vowed to continue its legal bid to halt permission for a livestock unit in the Herefordshire countryside, which they claim will add to the pollution problems in the river Wye and its tributaries.

The catchment of the river is a Special Area of Conservation (SAC) due to its importance as wildlife habitat, but it has regularly been shown to have levels of phosphates above official target levels, partly from farm runoff, causing “blooms” of algae which kill other species.

The Residents of the Golden Valley launched a crowdfunding appeal to pay for a legal move to overturn Herefordshire Council’s granting of permission for a cattle shed and store extension at a farmstead southeast of Bage Court near Hay-on-Wye.

The campaigners say that, while the farm itself is not within the SAC, runoff from the farm would end up in the river Dore, a tributary of the Wye which is in the SAC. For this reason, they say Herefordshire Council should have carried out an assessment of the development’s likely impact on habitat.

The campaign has already raised £65,000 from 1,200 separate pledges of support, but its initial effort foundered when the High Court dismissed its bid for a judicial review in June, in a judgment only published in late August.

The group, who do not wish to be named individually, were advised that this left the door open to an appeal, which it has now submitted, and for which it now needs to raise a further £35,000 to see through.

Herefordshire Council said it was unable to comment while legal proceedings continue.

Meanwhile the Wye Salmon Association said that a “citizen science” programme to monitor phosphate pollution in the waters of the Dore since June showed that at all locations measured, phosphate levels exceeded targets set by government agencies, in some cases by eight times as much.