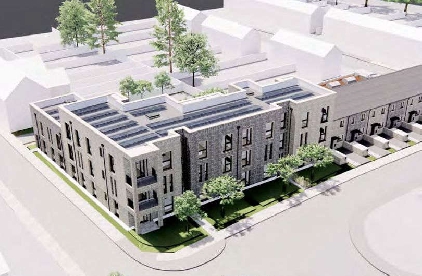 There are plans to build what could become the first carbon neutral council homes in Cheltenham.

Cheltenham Borough Homes wants permission to demolish the existing vacant home and other buildings at 320 Swindon Road and build 17 flats and seven houses on the site.

The not for profit company, which manages Cheltenham Borough Council’s housing stock, says it is their aspiration to make the development a net zero project.

Carbon neutrality is a state of net-zero carbon dioxide emissions. This can be achieved by reducing such emissions.

The homes have been designed in a way to reduce heat loss and the scheme will be gas-free with air source heat pumps and solar photovoltaics panels.

The homes would also be made of materials which reflect the local character of the area.

Parking spaces would be provided to the front of the proposed houses and to the apartments via an entrance off Malvern Street.

Consultants working on the scheme say it will provide good quality homes within a well served and popular area.

“Given the variety of architectural styles and housing quality along the street we believe the principle for development and the nature of our proposals to be fitting,” they said.

People have until October 19 to comment on the proposals which the council is expected to consider by December 10.