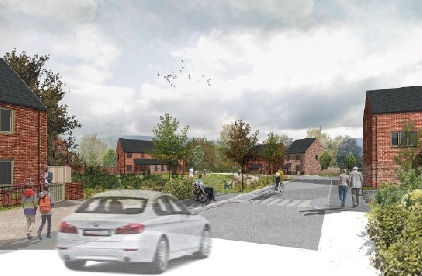 But building work will need to wait until a decision on a village green application at the site is decided.

The plans for the the councils housing service to build a mix of one, two, three and four-bedroomed homes and two adapted bungalows at the former Bronllys primary school site near Brecon.

The application came in front of the council’s planning committee  on Thursday, September 30 two months after it had been deferred.

The decision in July had been taken to allow objectors the opportunity to speak against the proposal.

At the meeting Bronllys county councillor Karen Laurie-Parry pointed out that an application to register the playing field of the primary school site as a village green had been submitted.

Objector Mitch Bouette said that developing on a play park and village green would affect the village children negatively.

Barrie Davies of Asbri planning who is the council’s agent on this application said: “There has been concern about the loss of existing play area.

“There is a live village green application, but this is a separate process which is outside the planning process and should not influence any decision today.”

“If it is approved then clearly there would be an impact on this development and would not be able to go ahead in this current format.”
Cllr Hywel Lewis said: “The crux of this application is public open space.

“The arguments of the objectors don’t stack up when you have 136 square metres being replaced by 3188 square metres.

“The provision is extremely generous and housing density lowered we could have had a lot more housing on this site.”

He was willing to move a vote to approve the application.

Cllr Jonathan Wilkinson said: “Powys is in need of considerable investment in housing and this is just a start.”

The council’s planning professional lead officer, Peter Morris replied: “In time this committee will be responsible for determining that village green application when it’s ready.

“From a development perspective in terms of bringing forward the site, it would have to wait.”

The application was approved by 15 votes to 2.

Bronllys along with Talgarth Primary School, closed its doors on August 31, 2017, as part of a school reorganisation programme in Powys.