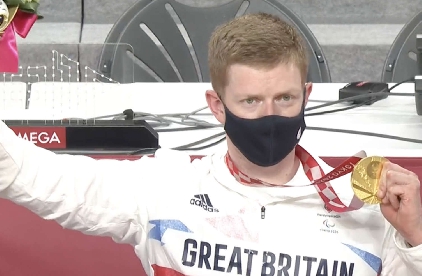 A Powys Paralympian who won gold at the Tokyo Games has been congratulated on their success by the county council.

Jim took up wheelchair rugby after becoming inspired by the London Paralympic Games in 2012. In 2013, he went on to represent Great Britain, and competed in his first Paralympic Games in Rio 2016 where Team GB finished in fifth place after narrowly missing out a place in the semi-final.

This year's Paralympic Games in Tokyo resulted in 14 medals for Welsh athletes; double the tally of Rio 2016.

Cllr Rachel Powell, Powys County Council's Cabinet Member for Young People, Leisure and Culture, said: "I am delighted to hear about Jim's achievements in Tokyo, and to see him lead his team to a gold medal.

"The Paralympics is such a prestigious event and I think Jim has done himself, and the whole of Powys, proud with what he has achieved. I am sure many people will join with me in congratulating Jim, along with the rest of Team GB, on their success."

Reflecting on his time at the Tokyo Paralympic Games, Jim Roberts, said, "Tokyo was an amazing experience, my overriding feeling upon winning was one of relief. Relief the Games had actually happened. Relief that the belief others had placed in us could be rewarded. And relief that all the hard work over the past 10 or so years had been enough."