Village pub to be converted into housing 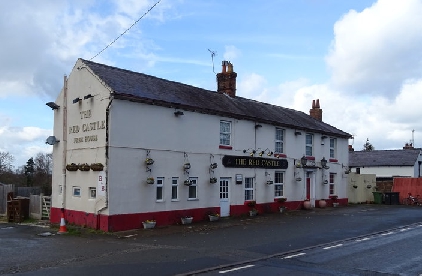 © Copyright JThomas and licensed for reuse under this Creative Commons Licence.

A village pub could be converted into housing after plans to demolish it were rejected.

Under plans submitted to Shropshire Council, the Red Castle in Harmer Hill is set to be extended at the back and turned into a terrace of four houses.

The pub closed in 2018 and earlier proposals to demolish it to make way for four new-build semi-detached homes were refused council planning officers last April.

An appeal was lodged with the planning inspectorate but was dismissed after the inspector agreed with the council’s assessment that the benefits of the development did not outweigh the harm caused by the loss of the pub, which was built in the late 19th century and is a non-designated heritage asset.

A further application for the construction of a bungalow on land near the pub was also rejected over road safety concerns and an appeal dismissed.

The owners of the pub, a Mr and Mrs McCarthy, have now proposed converting the building instead, saying this solution overcomes the issues which led to the refusal of the previous scheme.

SelfBuildPlans, agent to the applicants, says in a design and access statement: “As a result of its long-standing use as a public house, the existing building has significance arising from its heritage interest and as part of the village’s historic fabric and community life, which merits consideration.

“The council has identified this building as a non‐designated heritage asset (NDHA) and so worthy of retention.

“Following the recent applications, this application proposes to retain the building but with extensions and alterations convert it into four mews style properties, hence retaining the importance of the building within Harmer Hill.”

The application will be decided by Shropshire Council after the consultation period ends on September 5.