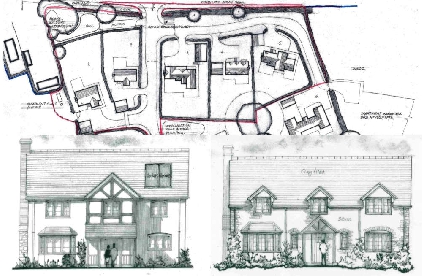 Bids to build ten traditional homes by a North Herefordshire village, five of them self-built, has been refused, while plans for a further nine on the same site have been withdrawn.

The refusals were made due to concerns over water pollution, their design, and “inefficient use of land”.

The proposals, put forward in July last year, were for houses “of different sizes and design, following traditional vernacular lines” by Townsend Farm on the east side of Pembridge, alongside the A44 between Leominster and Kington.

There were to be four development phases on the site, leading to 19 new homes in all, half of them self-built.

“The advantage of self-build units is that they are prioritised to local people in the first instance and then local Herefordshire people secondly, before being available on the open market,” the application for these said.

But Herefordshire Council’s planning officer said the bids required a habitat regulations assessment as the site lies within the catchment of the River Lugg special area of conservation (SAC).

Without being able to demonstrate they would cause no harm to this, the proposals fell foul of local and national planning and conservation policy, she said.

The site is one of seven around the village earmarked for a minimum of 67 houses in the village’s neighbourhood plan. This identifies the Townsend Farm site as one where “a phased approach enabling self-build and custom-build houses would be encouraged”.

But the proposals set out in the four separate applications “would result in an under-provision of housing growth, comprising an inefficient use of land that would result in the failure to deliver affordable housing, infrastructure and community facilities, through a section 106 agreement (requiring the developer to fund these)”, the planning officer said.

She further objected that the siting, scale and appearance of the proposed houses would harm the Pembridge conservation area within which they would lie, and particularly the setting of the grade-II listed Townsend farmhouse.

Though such harm would be “less than substantial”, it would still outweigh the public benefits of the scheme, she concluded, and added that the overall design also “fails to reflect its context or provide well-designed buildings or place”.

The council’s building conservation consultant earlier said the designs “veer towards the pastiche”, but did not think they would have “a significant adverse impact” on the village.

Pembridge Parish Council supported the applications, but said it wanted them to be considered “as one overall application” to enable section 106 funding.