Tory candidate told Sikh rival he was 'talking through his turban' 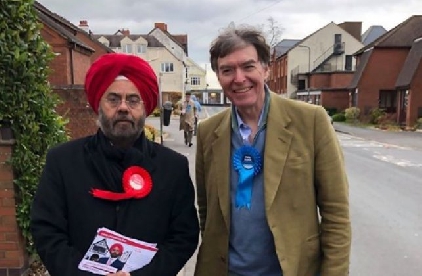 A Conservative candidate has apologised after saying his Labour rival was "talking through his turban" at a hustings event in South Shropshire.

Philip Dunne, who is seeking re-election as the MP for Ludlow, made the remark after being asked a question about education funding.

Labour's Kuldip Sahota, who is also fighting for the seat, said he was "shocked and deeply hurt" by Mr Dunne's words, adding: "To insult my turban is to insult my faith."

"He said 'Kuldip, you are talking through your turban' and there was a sharp intake of breath from those around me," Mr Sahota recounted.

"I was shocked and deeply hurt that someone who was an MP for 14 years would make such a derogatory comment.

"These are the kind of offensive comments I remember receiving in the 1970s."

Mr Dunne said he apologised "unreservedly for the offence caused" at the hustings event in Church Stretton.

However, Mr Sahota said the apology did not come swiftly enough.

"I think he should have said sorry straight away without my prompting," he said.

"This is extremely insulting to the Sikh community."

The Conservative Party have confirmed that Mr Dunne will not be suspended over the remarks.

Fighting for the Ludlow seat alongside Mr Dunne and Mr Sahota are Hilary Wendt from the Green Party, and Heather Kidd from the Liberal Democrats.