Top performance for 111 and 999 call-answering 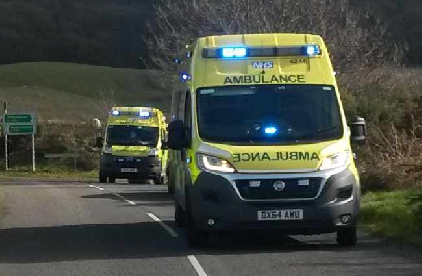 The West Midlands’ 111 service was the only one in the country to meet a national call-answering target, performing nearly twice as well as providers in some other areas, its chief says.

The West Midlands Ambulance Service took over the non-emergency NHS line in most of the region last year.

In a report for the governing trust’s board, chief executive Anthony Marsh writes that control centre staff’s hard work “is paying massive dividends for patients”, and saw one week where 97.4 per cent of calls were answered within 60 seconds. The target is 95 per cent.

He adds that, in response to a staff survey, changes are being introduced at the control room, at Brierley Hill, near Dudley, to make the chain of command clearer and improve supervision.

WMAS covers a 5,000-square-mile area consisting of Birmingham, the Black Country, Coventry, Herefordshire, Shropshire, Staffordshire, Telford and Wrekin, Warwickshire and Worcestershire, and took over control of 111 provision in all areas except Staffordshire in November 2019.

Mr Marsh writes: “New figures show that the hard work of staff in the 111 control centre is paying massive dividends for patients.

“The trust was the only 111 provider to meet the main national metric of answering calls within 60 seconds, reaching 97.4 per cent for the week.

“A number of providers were in the 50s.

“A number of changes are to be introduced within the 111 service as a result of feedback from staff in a recent survey of views.

“Around 370 staff responded to the questionnaire from the head of 111.

“The changes are designed to provide better support for staff and, ultimately, help deliver the best service to patients.”

“The call centre is being divided into zones and, once complete, a supervisors will be allocated to each zone,” he writes.

“Each member of staff should know who their supervisor is and the supervisor which staff they are supporting.”

Elsewhere in the report, which due to go before the West Midlands Ambulance Service University NHS Foundation Trust board on Wednesday, May 27, Mr Marsh notes that WMAS also answers 999 calls faster than any other ambulance service in England.

“What is more remarkable is that it was only the massive surge in calls during the early days of the COVID-19 pandemic that resulted in the number being so high.

“Over half of that number came in March when the trust was dealing with demand 25 per cent above what would normally be expected.”

Throughout the same year, the North East Ambulance Service took longer than two minutes to answer 999 calls on 955 occasions, giving it the second-lowest total. The London Ambulance Service had the highest, with 24,870.