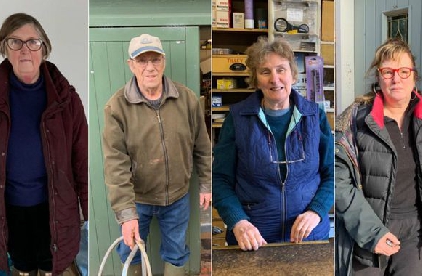 Some of the 18th-century cottages here were once stables, and a number of them are Grade II listed.

With the River Teme just 50 metres away, it's no surprise they've been flooded before. A lead plaque at eye level on the wall of one shows the high water mark from a flood in 1896.

This time the water was a metre or so lower than that, but that's little consolation to the mainly middle-aged and elderly residents whose lives have been thrown into chaos by Storm Dennis.

Here, Sky News visits those who live in four of the homes on Church Street to see how they have been coping in the aftermath of the storm.

Diana Ryan lives at number 13, the house with the plaque.

"Furious with the lack of help and interest from the government, from the Environment Agency, from anywhere."

Like the other residents here, Diana did get a warning from the Environment Agency. She was home alone at the time, and did her best.

"I put sandbags down, but it made no difference. I'd taken as much as I could upstairs but couldn't manage everything.

"When it got too deep, my daughter and son-in-law came and took me to their house.

"I'm hoping that I can get back in soon, but I know it's going to be months before that happens, so I'm going to have to find somewhere to rent.

"But you want to be in your own house, don't you?" she says.

A local councillor, Gill has been trying to help others out where she can. As we are talking, a lady comes over to offer the spare room in her house to anyone who needs it, and Gill gratefully takes the details to pass on.

She, too, got advanced warning of the floods, but like many here, she wasn't sure how seriously to take it after four false alarms in as many months.

"The warnings were timely enough that I managed to move the most important things upstairs. But this time it's definitely worse than the floods in 2007."

"I just feel brain dead," she says, believing she is functioning on adrenaline rather than sleep.

"Thankfully I've got somewhere to stay for now, but I still need to find accommodation for the next few months."

Number 18, The Malt House, is owned by Sadie Chalkley.

Last time the floods hit - in 2007 - she had her 97-year-old mother to look after. This time it's just her. On both occasions she decided to stay at home, despite the discomfort.

She's already back at work today in her family business, Banfield's ironmongers, where the basement has flooded but the shop floor remains dry.

"We got the EA warnings, and councillors coming door-to-door to check that everyone was okay," she tells me.

"But I was at work when the first warnings were issued, so I didn't have time to get back and do much prepping for the floods.

"When I went to bed, wearing all my clothes and with two hot water bottles, it was very cold and very dark. I could hear pieces of heavy furniture bumping into each other as they floated around downstairs.

"All I had was my mobile phone, which thankfully one of my relatives took to charge up for me after he waded through the flood water."

Unlike some, Sadie is more pragmatic about the floods.

"We live next to a river and there's nothing you can do to stop it. It's the water table. I'm afraid it's what we've done to the climate," she says.

At the end of the row is the Cider House.

Its owner, Robert French, counts himself lucky that his accommodation is on the first floor - but all his possessions in the storage areas below have since been ruined.

"At least I can stay in my home," he says. "But I feel so sorry for those who can't.

"When the warnings come, telling you you're in imminent danger of flooding, it's enough to worry anyone. All you can do once it arrives is just sit there and watch the water rising."

Floods like this test the resilience and character of the communities they affect.

Robert's story shows that this time, the people of Tenbury were not found wanting for either.

"When the warnings came, we got a group of us together to try and help as many people as we could, putting out sandbags and doing whatever we could to get their possessions moved and the defences in place," he says.

"Now we're just trying to do what we can to help get people's lives back on track."