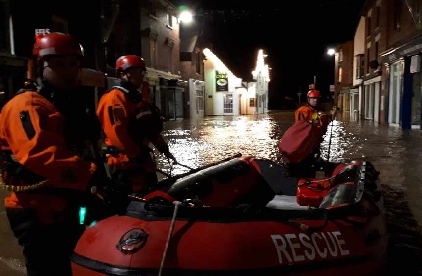 Police say a search to find a missing woman in floodwater will now be a recovery rather than rescue operation.

Chief Superintendent Tom Harding from West Mercia Police, on behalf of the multi-agency flood response, has released a statement regarding an incident in Tenbury yesterday: “A search and rescue operation was carried out throughout the day yesterday (February 16) to rescue a woman who was swept into flood water near Tenbury.

“Last night for safety reasons and with a heavy heart, the rescue operation was called off. It was not a decision that any of the emergency services took lightly, but Fire and Rescue colleagues who were coordinating the operation, took the decision as conditions became extremely challenging due to darkness and fast flowing flood water.

“The search has continued this morning, including the use of the police helicopter. Sadly, however, due to the circumstances of the length of time in the water and other conditions we believe that this will now be a recovery rather than rescue operation. Her family have been informed and are being supported by specially trained officers.

“A man was recovered from the water as a result of the same incident, and was airlifted to hospital where he currently remains in a stable condition.”