Shrewsbury’s Lord Hill Hotel to be converted into houses 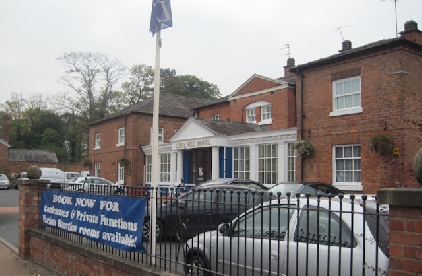 Plans have been unveiled to turn what was once one of Shrewsbury’s premier hotels into three houses.

The proposals for the Lord Hill Hotel in Abbey Foregate have been put forward by building firm SY Homes, which wants to strip back the modern extensions in order to return the Grade II-listed building to its former glory.

The developer has also set out ambitions to build apartment blocks on the site, which will be subject to further planning applications.

A supporting statement by Qu-est Design and Planning, agent to the applicant, says: “This application marks the first phase of the development of this site and concentrates on the conversion of the original building from hotel use to residential.

“The remaining site development proposals and listed building applications will be submitted in the near future.

Constructed in the early 19th century as a single residence, the building first opened as a hotel in the 1960s.

Since then it has been extended multiple times, including the addition of the front conservatory in the 1980s.

Wrekin Lodge, a 24-bed accommodation block to the rear of the hotel, was also added around that time.

The hotel closed on New Year’s Day last year with previous owners Raymond and Vera Proctor, who had run it since 2001, putting its demise down to a “significant downturn in trade”.

The supporting statement says the later extensions are “haphazard” and “piecemeal”, which have “significantly diluted the character and historic interest of the original listed building”.

This is backed up by a heritage impact assessment carried out by Castlering Archaeology, which says the work will have a “positive” impact on the building and its surroundings.

It concludes: “Cumulative changes have taken place to the present Grade II-listed building since the first cartographic record of 1838, reflecting its history and development.

“The use of the building as a hotel is no longer viable and the outline redevelopment plan will secure the upkeep and survival of the Grate II-listed building and restore the character, architectural and historic interest of the building.

“Removal of the conservatories and distracting signage, together with implementation of a sensitive landscaping plan for the Abbey Foregate frontage, will restore the significance of the building as a dwelling of some standing.”

Conservation officer Karen Rolfe said: “With the retention of the listed building being key to this scheme, these applications are supported in principle and if implemented carefully and to a high standard both internally and externally, should result in the enhancement of the site and setting of the listed building, and a positive impact on the building’s significance and character, and with the landscaping scheme also being shown, an enhancement to the street scene within the Conservation Area.”

The application was unanimously supported by Shrewsbury Town Council’s planning committee at a meeting this week.

Councillor Pam Moseley said: “I thought this looked a good scheme. It will be nice to see the building taken back to what it was.”

The application will be decided by Shropshire Council in due course.