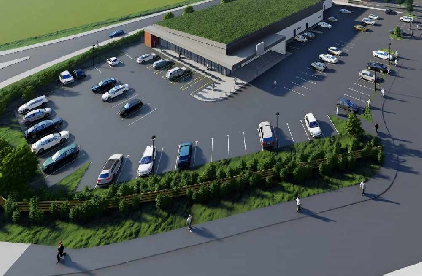 There are plans for a Lidl supermarket, new medical centre and children’s nursery on the outskirts of Ledbury.

Deeley Properties Ltd and Countrywide Farmers PLC want to develop the 3.9 acres worth of grazing land south of Leadon Way and east of Dymock Road.

The shop would have 102 car parking spaces, 53 spaces are planned for the medical centre and the nursery would 35 spaces.

All vehicle access to the site would be via a new junction on the southern boundary from Dymock Road.

If approved, the applicants would build the food store and medical centre while the children’s day nursery would be built by Woodlands Nursery Group.

Architects working on the scheme say the proposals look to regenerate the site by providing a new modern, fit for purpose supermarket, along with new, complementary uses.

They  say the development would create 200 jobs during the construction phase and 65 jobs at the nursery and food store.

“The delivery of the medical centre in particular addresses a long-term aspiration described at both tiers of the development plan for the provision of enhanced primary care provision; the existing surgeries being described as at full capacity and without the ability to expand on the existing sites,” the planning statement reads.

“The children’s day nursery will likewise cater for unmet demand. The Lidl food store offers greater breadth of choice for local residents, as well as significant job opportunities whilst ensuring the financial viability of the scheme and thus the delivery of the medical centre.”

People have until August 6 to comment on the plans.

Herefordshire Council is expected to consider the scheme by September 25.