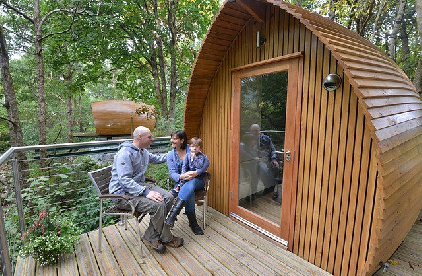 A caravan and glamping site in north Shropshire is set to expand under plans expected to be approved next week.

Councillor Paul Wynn, who represents Prees on Shropshire Council, wants to increase the holiday accommodation offered at his farm, Hadley Park, off Wrexham Road on the outskirts of Whitchurch.

As the site is owned by an elected member, the application must be decided by the northern planning committee – of which Councillor Wynn is chairman.

When the application is up for discussion at a meeting next week, Councillor Wynn will leave the room and will not get to vote.

The farm has been owned by Councillor Wynn’s family for more than 80 years and began to diversify into tourism in 2014 when approval was granted for 10 touring caravan pitches and eight seasonal caravan pitches.

Two glamping pods and eight camping pitches were approved in 2017, and the farm also offers an equestrian cross-country course and cafe.

A report to the planning committee by case officer Jane Preece says: “The current application is seeking to alter the mix of tourist accommodation and provide an additional three units, to include two shepherd huts and a further glamping pod.

“It is stated that by increasing the number of ‘glamping’ units this will return a higher proportion of higher value/more profitable units on the site.”

The application has been supported by Whitchurch Town Council and no objections were received from members of the public.

Concerns were raised by the council’s drainage officers, as “the applicant failed to discharge the pre-commencement drainage condition” relating to a previous applcation, the report says. This has now been resolved.

The report says: “The site utilises land which has largely already received consent for caravan and camping accommodation use and the proposal is in connection with an existing tourism business, which has previously been assessed as suitable in term of location.

“The application proposes some modification to the existing use with an increase in the number of overall units from 28 to 31 and to include for 3 units to provide more on-site choice and attract a higher revenue.

“The additional shepherds huts and glamping pod will meet the definition of a caravan as required by (planning policy).

“There are no residential properties immediately adjacent to the application site. In addition, the distance of the site from the nearest dwellings is considered sufficiently far enough not to cause any adverse impact on residential amenity.”

The report recommends planning permission be granted. The committee will decide the application at a meeting on Tuesday, May 8.