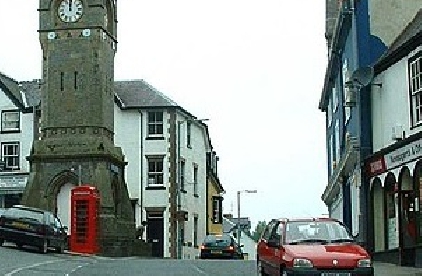 The Mayor of Knighton, Cllr Nick Johns, has been suspended for six months as a councillor after he was found guilty of several serious breaches of the Town Council’s Code of Conduct.

Powys County Council’s Standards sub-committee met on Thursday, May 27 to decide whether Cllr Johns had misbehaved at a public meeting over a year ago and if so what punishment to give him.

Committee members were told that at a meeting to discuss the town’s response to the coronavirus emergency held at Knighton Community Centre on March 18, 2020, Cllr Johns launched into a foul-mouthed tirade and showed bullying behaviour which has left several people feeling anxious to this day.

A few days later on March 30, Cllr Johns received a formal caution from Dyfed Powys Police for the use of threatening, abusive words, and disorderly behaviour.

Mr Johns did not appear at the meeting to explain his actions or send a legal representative to argue his case.

Many groups including church and council representatives had been invited to the meeting on March 18, 2020.

The outburst by Cllr Johns occurred about 40 minutes into proceedings.

It centred on an email he had sent to a member of the community centre committee about his attendance.

In it he had said that she was a newcomer, and that the town would be best served by the Knighton community support group, which was full of locals and could better serve the area.

At the meeting, his own local credentials were then questioned at which point according to witnesses, he became volatile, stood up, and started pointing aggressively at people, and calling them “f****** b******* and w******.”

He then he left the building, got into his car, but pulled up and re-entered the building for a second rant.

As he was leaving for the second time Reverend Kevin Dare followed him out.

Rev Dare told the committee he had been was concerned about Cllr Johns safety and that driving off in a temper could cause an accident.

Due to concerns about Rev Dare’s welfare Louise Hardwick, who had been at the meeting as its secretary, also went outside.

Rev Dare, said: “I was attempting to chat to him and calm him down before he drove off.”

They had chatted for a while with Cllr Johns airing his own concerns about the pandemic, then as he left, he turned to Mrs Hardwick and told her to “f*** off”.

In her evidence, Mrs Hardwick said: “When he had his first outburst, I asked him to calm down and not use this language.”

She explained when he turned to insult her outside the meeting, this was when she decided to call the Police.

“I felt threatened and still feel anxious to this day,” said Mrs Hardwick.

Sinead Cook of the Ombudsman’s office summed up the evidence.

Ms Cook said: “Although there are differing accounts from witnesses as to specific language used by Mr Johns, on balance the standards committee considered there was sufficient evidence to suggest that Cllr Johns used disrespectful and abusive language.

“Cllr Johns acknowledged during his interview that there clearly was a breach of the code.

“Although the outburst makes it unclear who the comments were directed at, it was clear it had an effect on all present.

“The behaviour towards Mrs Hardwick was bullying.

“Given Cllr Johns role as Mayor, and the purpose of the meeting to bring people together to discuss how best to assist the Knighto in dealing with the coronavirus outbreak, his behaviour was particularly shocking.”

Following deliberations Standards committee chairman, Stephan Hays, said: “We would not expect this behaviour of any town councillor it is an aggravating factor that he is the mayor.

“It is our unanimous decision that we suspend Cllr Johns for a period of six months with immediate effect.”