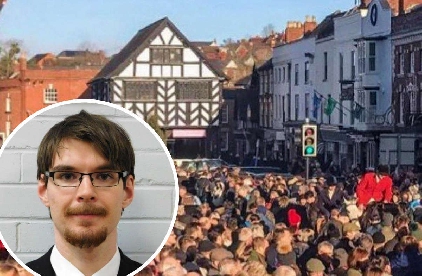 A Herefordshire council has narrowly voted not to oppose a popular but controversial Boxing Day hunt meet in the town this year.

Ledbury Town Council last night voted six to four not to call on Herefordshire Council to block a bid by the Ledbury Hunt to have roads in the town closed for its riders and dogs on December 27.

Liberal Democrats councillor Matthew Eakin put forward a motion that the council take no action to facilitate the hunt, due to evidence cited by the

Malvern Hills Trust of systematic violations of the rules around trail hunting, and lack of consultation by the Hunt.

The Malvern Hills Trust, which manages areas of land used by the Ledbury Hunt, voted to ban trail hunts on its land last month.

“The issue is what we want this town to be associated with,” Coun Eakin told the meeting.

“We shouldn’t be glorifying the aesthetics of blood sports.”

Tom Leeke of the Ledbury Hunt had earlier conceded the hunt had made “honest mistakes” in the past, but that the Boxing Day event was a historic and much-loved piece of pageantry in the town.

Backing the motion, deputy mayor and fellow Lib Dem Coun Phillip Howells said: “There is a sense of entitlement, that they can do what they like. Blood sports are a major cause of loss of biodiversity.”

Coun Tony Bradford, who opposed it, said: “We have traditions, and some bad ones have gone. But they aren’t harming people.

“I wouldn’t chase round after a scent, but they have the freedom to do it.”

Also opposing, Coun Dee Knight said that while she would keep her own views on hunting to herself, it was “upsetting more people in the town turn up turn up for the Boxing Day meet than for Remembrance Sunday”.

“If hunts are going to follow the rules they can continue to go about their business – I will defend that right under the law,” she said.

“But if not, we shouldn’t condone it.”

Citing the Malvern Hills Trust evidence, she told Mr Leeke: “You have some ground to make up in regaining the confidence of the public.

“You are stretching the tacit permission of this county if you carry on as you have, especially if you are flouting the law. You are making a lawful application for a road closure. What you then go off and do must be within the law.”

She added: “I expect there will be protests, and I expect those who protest to be be allowed to do so. Equally, those attending and their supporters are entitled to be in the town centre without harassment.”

Coun Eakin confirmed that that the town council will consider in the new year whether or not to support the Hunt in future, once all councillors have considered the evidence of alleged lawbreaking during hunts.

Polly Portwin, director of hunting for the Countryside Alliance which campaigns for field sports, said: “The decision taken by town councillors is the correct one and I hope the Meet will continue for many more years to come.”