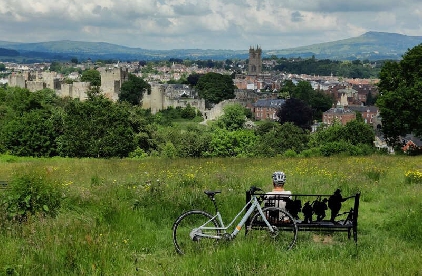 © Copyright Mat Fascione and licensed for reuse under this Creative Commons Licence.

A plea has been issued for Shropshire Council to urgently provide more business sites in Ludlow to help local firms expand.

The latest calls come after the authority ruled out the possibility of the vacant biodigester in Coder Road being re-purposed, in case it is needed to process waste again as a result of impending law changes.

The council has also revealed that talks with the owner of the town’s only site currently allocated as new employment land had so far been unsuccessful.

Hydraulic equipment supplier Flowfit has until recently been in discussion with the council over the biodigester site, and company bosses have previously said they may have to expand elsewhere if a deal could not be reached.

Councillor Andy Boddington, who represents Ludlow North, said he was concerned that the lack of available sites in the town was now hindering business growth and job creation.

In a question to the council’s cabinet, he said it was disappointing that nine months of discussions with Flowfit had resulted in the company being told the site was not available.

“The company is now looking at sites in mid Wales where there is more support from local government for business expansion,” said Councillor Boddington.

“At least one other light industrial company in Ludlow is looking for local premises in which to expand within months.

“Council officers have told companies that employment land is in demand in south Shropshire. There is certainly demand in Ludlow. There will be more demand in the next few years.

“Ludlow and the adjacent parish of Ludford have approval for around 750 homes, many of which are under construction.

“We already have a very tight labour market. We have a shortage of semi and high skilled jobs in the engineering sector, a sector that supports hundreds of jobs locally.

“What plans does Shropshire Council have for the former biodigester site and the adjacent former household recycling centre on Coder Road?”

Councillor Ian Nellins, portfolio holder for climate change, said the council was awaiting the outcome of the Environment Bill, which if made in to law would require the council to collect food waste separately to green waste.

He said: “As the Ludlow biodigester site already has the necessary planning and other requisite consents, the council seeks to retain the potential to resurrect such activity at Coder Road until legislation is confirmed next year.”

Councillor Boddington said it was “good news” that the site could be brought back into use for its intended purpose, but added: “I am disappointed that the council did not make this clear earlier to companies interested in the Coder Road site to enable them to prioritise other sites.”

Councillor Boddington also asked what plans were in place to develop a site south of Sheet Road, which is allocated for business growth in the council’s adopted development plan. The new local plan, expected to be adopted next year, also allocates adjacent land to expand this further.

Councillor Ed Potter, portfolio holder for economic growth, said the land was not currently serviced and was therefore not ready to be built on immediately.

He said the council had been in talks with the landowner around 18 months ago about purchasing some of the land as part of the council’s business parks programme, in the hope of drawing funding from the European Regional Development Fund (ERDF).

Councillor Potter said: “Unfortunately, following engagement with their agent, we were not able to agree on a deal for the purchase of the land, which would have met the requirements of the European funding and allowed us to scope out a suitable commercial development programme for the site.

“It is however the intention of the team to re-engage with the land owners through their agent to review their current plans and the potential to marry up interest to support in delivery of new commercial space that could be delivered by the private sector.”

Councillor Boddington said it was disappointing to hear that the town had missed out on funding, and questioned why the site was included in the local plan if it was not likely to be developed “in a timely fashion”.