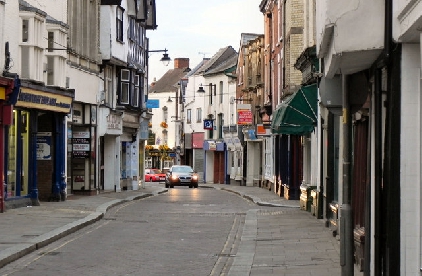 High Street in Leominster - © Copyright David Dixon and licensed for reuse under this Creative Commons Licence.

Herefordshire Council is considering ‘ambitious’ temporary changes to town centres to create a safe environment for both walking and cycling.

Herefordshire Council is considering ‘ambitious’ temporary changes to town centres to create a safe environment for both walking and cycling.

The proposals could include reducing the speed limits to 20mph in Hereford city centre and the market towns.

The Government announced last month it was creating a £250m emergency active-travel fund for local authorities.

They see this as a ‘window of opportunity’ to embed walking and cycling as part of new long-term commuting habits and reap the associated health, air quality and congestion benefits.

The first tranche of this funding for Herefordshire is £40,000 but council leaders are hopeful of receiving an extra £150,000 later on.

Some of the options being considered for Hereford include lane closures on Newmarket Street, Blueschool Street and Commercial Road to allow social distancing by shops, widened footways and bus or cycle lanes along.

Broad Street in Ross-on-Wye could be closed to traffic from 9.30am to 4pm from Monday to Saturday with Cantilupe Road being changed to an ‘access only’ street.

In Leominster there could also be a timed closure of town centre roads which would affect Corn Square, South Street, High Street and West Street from 9.30am to 4pm.

Proposals for Ledbury include making Bye Street and Woodleigh Road one way and widening the footway on Market Square.

While Bromyard residents could see the pavement widened on High Street and Panniers Lane. Panniers Lane could be made one way from Queen Elizabeth School to the A44.

A timed High Street closure for Kington is also being considered.

Infrastructure and transport cabinet member John Harrington said: “We are trying to continue to provide for people who do want to cycle or walk whether that is to shop or commute is up to them.

“We have a problem physically with space. As shops start to reopen we need to think about how we reapportion the space as we will undoubtedly get more and more people going into the city and towns.

“One of the ways of doing that is to take space off the carriageway where there is sufficient width to do it or close some roads if there are other accesses available to get that space on the streets for pedestrians, cyclists and even to have outdoor cafes.

“It gives us a great opportunity to support people who’ve travelled a different way during the Covid lockdown.

“It aligns with people wanting to travel more sustainably and reduce pollution.”

But councillor Nigel Shaw, deputy leader of the Conservative group, said the plans are overly ambitious.

“I like the 20mph limit the problem being I think the government has said you can put a limit in but you cant have it on its own so it would require chicanes.”

Julia Evans who lives near Kington said she was appalled by the plans for the market town.

“This “Emergency Active Travel Measures” policy is totally inappropriate for small market towns which rely on the support of the rural areas surrounding them.

“This will be the last nail in the coffin of a small town whose traders were already struggling to survive before the coronavirus outbreak and whom lockdown has hit hard.”

North Herefordshire MP Bill Wiggin has also voiced his concern over the plans.