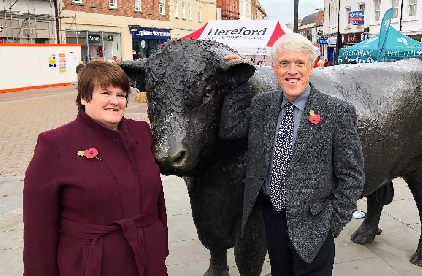 The Liberal Democrats have announced their general election candidates for Herefordshire.

And Ledbury councillor Phillip Howells, who is also the town’s mayor, is standing for the North Herefordshire constituency.

Lucy Hurds, who stood for the same constituency at the last two general elections, says Brexit is damaging people’s lives and hurting the UK economy.

“I have been a full-time campaigner for the County and am active with many local charities.

“As MP, I will continue to work to improve the lives of people in Herefordshire.

“I grew up in Ross, have raised my family here and know how services have declined.

“Brexit needs to end, it is damaging lives and our economy. It’s time for Parliament to concentrate on other urgent issues that affect us all – health, education, the environment and housing.”

Phillip Howells believes this election is a great opportunity for the Lib Dems.

“We made gains in council elections in May,” he said.

“In June, one in every five voters in Herefordshire voted Liberal Democrat.

“This election is a clear choice. Voting Liberal Democrat will end this Brexit saga and ensure we don’t spend years in similar Brexit limbo while we negotiate trade deals.”

The Lib Dems finished fourth in Hereford and South Herefordshire in 2017 with 3,556 votes.

They faired better in North Herefordshire finishing third with 5,874 votes.