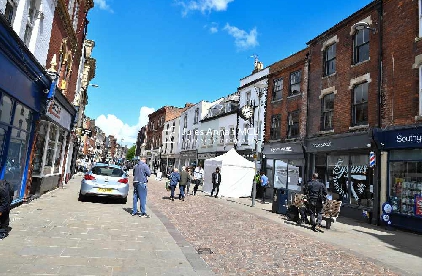 The solicitor of Herefordshire serial killer Fred West's wife says he thinks it's "unlikely" the body of missing Mary Bastholm will be found in the Gloucester cafe being searched by police.

Leo Goatley told Sky News West was a "fantasist" who at times made admissions to inflate his notoriety, but "he certainly did not make an admission about Mary Bastholm.

"I would think it very unlikely she was actually murdered or dismembered at the pop-in cafe."

Police have been searching Gloucester cafe Clean Plate in connection with Ms Bastholm's disappearance after being alerted by a film crew making a documentary there.

The 15-year-old vanished from a bus stop in 1968 and her body has never been found. She used to work at the cafe.

But while there is doubt over her remains being found in the cafe, a former workmate of West's told Sky News says he's "95 per cent certain" that the notorious serial killer did murder the teenager.

Dennis Tandy-Clayton, 77, worked with West for eight years at a metalwork factory in the city and says he can remember police turning up on several occasions in early 1968 wanting to speak to him.

"I remember the time that girl went missing and police coming to the factory looking to speak to him.

"They came several times. He would always be back at the work the very same day saying 'they've got nothing on me'.

"I feel desperately sorry for the girl's family. This has brought all his crimes back to life again. It's horrible.

"I'm 95 per certain he was responsible for what happened to her. She worked at the café and he was a regular. The bus stop is less than half a mile away. It's awful."

One of Britain's most prolific serial killers, West committed at least 12 murders between 1967 and 1987 in Gloucestershire, the majority with his second wife, Rose.

All the victims were young women. Their dismembered bodies were typically buried in the cellar or garden of the couple's Cromwell Street home in Gloucester, which became known as the "House of Horrors".

Mr Goatley, labelled Fred West from Much Marcle a "fantasist" whose crimes were part of a "dreadful, wicked, murky episode" in Britain's history.

And that, he said, was one of the difficulties police had at the time of the initial investigation.

"Fred West was such a fantasist they had to try and work their way through the blatant lies and fantasies to get some of the facts and reality.

"He did at times make admissions but he certainly did not make an admission about Mary Bastholm, although it is said that he told his son on a prison visit that he did kill Mary Bastholm and he would use it as a bargaining chip later on to get privileges whilst he was in prison."

Mr Goatley, who represented Rose West, said her husband may well have offered his services to the cafe while he worked doing odd jobs.

"There is a suggestion he was laying a floor there in 1968.

"I would think it very unlikely that Mary Bastholm was actually murdered or dismembered at the pop-in cafe.

"My concern is that she was abducted in a car, sexually abused and then killed and dismembered somewhere else."

West is known to have committed at least two murders on his own.

In 1994 he admitted murdering his daughter Heather, while Rose is known to have murdered Fred's stepdaughter, Charmaine. The couple were apprehended and charged in 1994.

But Fred took his own life while awaiting trial on 12 murder charges the following year. Rose West was convicted of 10 murders and jailed for life.

Gloucestershire Police are expected to be at the cafe in Southgate Street for a number of weeks.