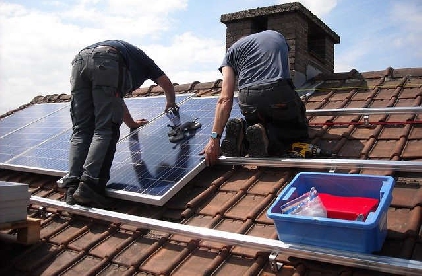 The housing company owned by Shropshire Council has been criticised for dropping solar panels from one of its flagship developments in order to save money.

Councillors on the authority’s housing supervisory board, which oversees the work of Cornovii Developments Ltd, said they were disappointed the firm had opted to cut measures aimed at reducing the carbon footprint of its homes.

Harpreet Rayet, managing director of Cornovii, told the board the company had a duty to its lender – the council – to show a profit on every development.

This presented a challenge when contractors at its Ellesmere Wharf site, the second to receive planning permission, were faced with delays in getting the land prepared for development after hazardous materials and gas pipes were discovered once they started digging.

Without the solar panels, the homes at Ellesmere Wharf will have an energy performance certificate (EPC) rating of B, while those on the company’s first development in Shrewsbury will have a rating of A.

“The programme has gone back by about four weeks because of the initial remediation issues.”

Councillor Tony Parsons said it was “very disappointing” that the company had decided not to install solar panels in order to make up the cost of the extra site preparation work.

He said: “When we looked at this site in the first instance it was always going to be a difficult site to develop.

“That we have taken a view to that we are not going to provide those homes with solar panels, I think, is disappointing.

“I’m sure there must have been other potential savings we could have made in the development of those properties without having to take that decision.

Mr Rayet said the homes would still be at least 21 per cent above current building regulation standards in terms of energy efficiency, with the company still planning to install a number of energy saving measures including a heat recovery system.

Councillor Roger Evans said the council “would have no leg to stand on” in asking other developers to build homes that were as energy efficient as possible if it was not ensuring its own company was doing the same.

He said: “I really, really think this should be revisited and solar panels should be put on to reduce the carbon footprint even more.”

Jane Trethewey, the council’s assistant director for homes and communities, said the board did not have the power to direct Cornovii to make changes to any of its developments.

Councillor Evans proposed the board ask the company to revisit the decision to cut the solar panels, and this was voted through.

However not all members supported the proposal.

Councillor Vince Hunt said: “I think we need to be a bit careful that we are not being too harsh on them.

“Of course I am disappointed that we are not going to get solar panels on the roofs, but I also understand that when you start digging holes and coming up with roads and asbestos the number crunching has to be re-done.”

Councillor Hunt asked: “What lessons have you learned from this particular site and going forward how would you be able to ensure we are not having this conversation again? I know you do due diligence but can that be improved on?”

Mr Rayet said extensive surveys had been carried out when the company purchased the site from the council, and these had been updated before work started on-site.

He added: “I don’t think we could have done any more.”