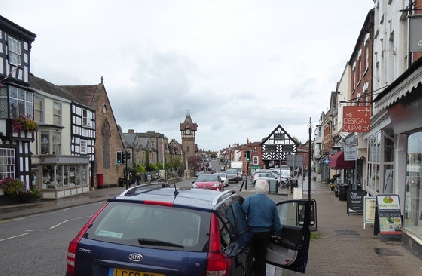 Opposition councillors say there is a lot of anxiety and anger over proposed temporary changes to town centres across Herefordshire.

They may also introduce timed road closures to create a safe environment for both walking and cycling.

The council is expected to receive some £200,000 from central government who have created a £250m emergency active-travel fund for local authorities across the country.

Whitehall see this as a ‘window of opportunity’ to ‘embed’ walking and cycling as part of new long-term commuting habits and reap the associated health, air quality and congestion benefits as the UK comes out of lockdown.

But Old Gore ward councillor Barry Durkin told today’s (June 25) cabinet meeting that many shopkeepers are anxious about the effect these changes will have on trade.

He also criticised the limited nature of the council’s public consultation over the plans.

“I understand that traders were notified on June 20 with the consultation ending on June 23,” he said.

“There’s a lot of concern and anxiety about the proposal from shopkeepers across the county and from residents.

“To my knowledge there is considerable anger in Ledbury.

“How may the council demonstrate that measures are in place to ensure that consultation with every shopkeeper and resident is robust with comments having been recorded, considered and address with commentary and reasons?

“The alternative seems to be just forcing the active travel measures through with the closing of town centres countywide thus adversely affecting shopkeepers and independent traders.”

Infrastructure and transport cabinet member John Harrington said there was no legal requirement for them consult the public about the proposed changes.

However, he said the administration felt they should try and consult as much as possible in the short time they had to do so.

“Many authorities have not consulted and that is a matter for the other authorities,” he said.

“In relation to what we are trying to do, we are required by the Government to do this or they will come in and do it for us.

“So, it comes down to that classic tension between trying to do something as quickly as possible in the best way as possible against trying to please everyone.

“We will continue to talk to any traders and retailers that come and address this to us and any parish councils we’ve consulted with or any that come forward at this stage.

“I’ve been speaking with many shopkeepers in Ledbury and Hereford through out the last few days looking at what they are saying specifically, seeing if we can change it, seeing if we can come to a compromise. Some of those changes have and will be made.

“It is not a perfect situation but it is incumbent upon us to do this, to do it quickly and to make sure we make the provision for the safety of people who are going to be using our streets.”