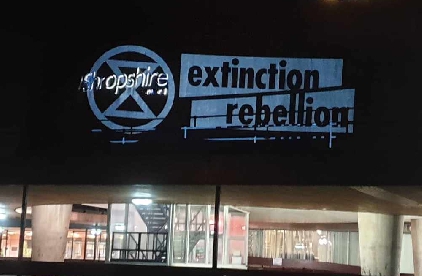 Environmental campaigners beamed messages onto Shropshire Council’s headquarters as they hit out at the authority’s “lack of action” in tackling climate change.

Members of Extinction Rebellion Shrewsbury beamed images and videos onto the council’s Shirehall headquarters and the nearby Lord Hill’s column.

The group said it was due to the council’s lengthy response to tackling climate change since declaring a climate emergency earlier this year.

The council plans to unveil its plans to tackle climate change at a meeting of full council on December 19.

Activists projected the Extinction Rebellion hourglass logo onto Lord Hill’s Column, before screening a bespoke video called “Where Is Your Plan?” on the curved façade of Shirehall.

“Back in May they told us that the climate crisis posed a catastrophic threat to humanity and that urgent action was needed.

“But seven months on, we’re still waiting for them to even deliver a Climate Action Plan.

“Where is the urgency in this emergency?”

Shropshire Council unanimously declared a Climate Emergency at a Full Council meeting on May 16 after a session featuring a series of last minute amendments while a crowd of protesters gathered outside the chamber.

“They say we are facing mortal danger from climate breakdown. Yet, instead of acting, they’re twiddling their thumbs. They can’t have it both ways. If you declare an emergency, you need to act like it too.”

In November Shropshire Council established a climate change task force of officers from across the council to establish a coherent, coordinated approached to addressing the climate change challenge headed up by Adrian Cooper.

“The Council has already been put on notice by legal charity ClientEarth because of their failure to act,” said Mr Russell.

“Extinction Rebellion is putting them on notice too. If they can’t produce a credible plan to reduce emissions to net zero by 2030 then they’ll keep on hearing from us. On the streets, in the courts and at the ballot box.”

Shropshire Council said the issue would be discussed at full council next week.