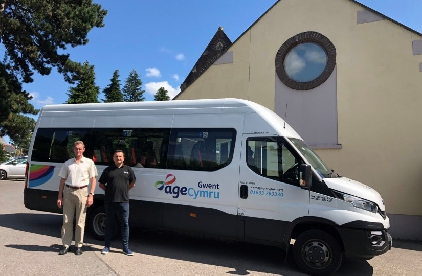 A charity which supports elderly and vulnerable people is searching for a safe location to park its brand new minibus after vandals targeted the vehicle.

Age Cymru Gwent invested in a custom built minibus to transport older residents around Monmouthshire and deliver them to local clubs – including the popular Monday lunch club at St Michael’s Centre in Abergavenny.

The bus was officially presented by Monmouth MP David Davies in June 2019 and, when not in use, is parked at the Abergavenny Community Centre.

But Age Cymru Gwent workers are dismayed to find it is attracting unwanted attention from vandals who have started putting glass bottles under the tyres and kicked in the side panels.

Mr Davies is now launching a local appeal for an alternative parking spot in the hope of preventing further damage to the bus.

“It is a real shame that somebody is trying to vandalise this vital community resource and I am very sad to learn that people would behave with such mindless disregard for others,” he said.

“I hope whoever is responsible thinks very carefully about their actions.”

“We provide an invaluable service and the minibus is a means for older people to get out and enjoy their independence,” he said.

“Our main worry is that it will become damaged similarly to the old bus and stop us in continuing to provide this essential community support network.

“I was therefore wondering if there is a kind-hearted person with a bit of spare ground within a five-mile radius of Abergavenny who would be happy for us to park the bus there instead.”