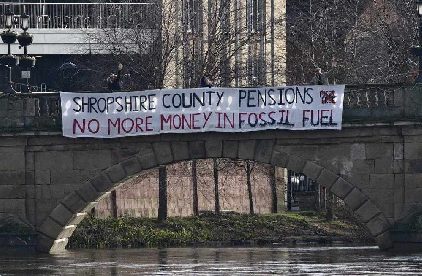 Campaigners have called on the county’s flagship pension fund to end its investments in fossil fuels in light of the huge drop in demand across the sector as a result of the coronavirus pandemic.

A new campaign group, Fossil Free Shropshire, says now is the right time for Shropshire County Pension Fund to follow others across the country in divesting, for both economic and environmental reasons.

The fund, which manages the retirement funds of Shropshire and Telford & Wrekin Council staff, as well as the Shropshire Fire and Rescue Service, school staff and town and parish council employees, currently has £27 million invested in BP and Shell.

It also uses the asset manager BlackRock, which manages £267 million on its behalf, and has been linked to the destruction of the Amazon rainforest.

Kris Welch, from Broseley, is one of the group’s organisers. She said: “Both Shropshire and Telford & Wrekin Councils declared a climate emergency last year.

“So why is the county’s pension fund staying invested in these companies? It’s totally hypocritical. It feels like it’s one rule for them and one rule for the rest of us.

“Residents and businesses across Shropshire are being told we have to be carbon neutral within the next ten years.

“So why isn’t the county’s pension fund doing the same? Pensions are supposed to be about saving for the future, not destroying it for our kids.”

With demand for fossil fuels plummeting during the pandemic, there have been warnings from influential figures like former Bank of England Governor Mark Carney that fossil fuel investments are at risk of losing value and becoming “stranded assets”.

Paul Cooper, a retiree who receives a pension from the fund, said: “I’m very concerned about the situation.

“It doesn’t make financial sense for my pension pot to be invested in these companies.

“I’m worried the pension pot could lose its value. If that happens, it won’t be the fund managers feeling the pinch. It will be council taxpayers. That doesn’t seem fair to me.”

The group has set up a website, fossilfreeshropshire.com, which includes an online tool that residents can use make their views known.

Its aim is to convince Shropshire and Telford & Wrekin Councils to vote to support divestment – following in the footsteps of other authorities across the country as well as the Church of England and over half of all UK universities.

Pension fund scheme administrator James Walton said: “The fund’s investment decisions are taken within the framework set by the regulations and statutory guidance issued by the Ministry for Housing, Communities, and Local Government.

“We believe climate change is a risk factor that should be monitored and managed and that is why we partner with three organisations to undertake monitoring and engagement on climate-related risks within our portfolio. These engagements have already yielded positive results.

“The fund will report the results of this research at the next suitable pensions committee meeting.

“While the fund acknowledges the risks associated with climate change, the fund’s preferred strategy is to monitor and engage alongside like-minded investors where it is felt we can have greater influence on investing responsibly.”