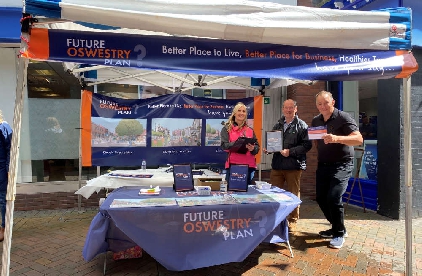 Ambitious plans to regenerate key areas of Oswestry will be finalised by the end of the year, council and business leaders have said.

The Oswestry Masterplan – the brainchild of the Future Oswestry Group (FOG) – will set out proposals to overhaul the road layout, revamp disused buildings, improve open spaces and boost public transport.

It could see the bus station scrapped in favour of a ‘transport hub’ near the railway station, with options for the site including retail and housing.

Speaking at the first of a series of pop-up stalls planned over the coming weeks to gauge public opinion to the emerging proposals, civic leaders said nothing was off the table at this stage of the masterplan’s preparation.

Once the competed plan is published at the end of the year, the next challenge will be to secure funding to bring the bold ideas to fruition.

But there are also a number of smaller-scale projects which FOG hopes will be realised much more quickly, including road layout changes in Church Street and the creation of an multi-purpose pedestrianised square on what is currently Festival Square car park.

FOG member and Shropshire Council deputy leader Steve Charmley said he would like to see the area used to host markets, pop-up exhibitions and offer surrounding food and drink establishments the change to capitalise on the growing popularity of European ‘café culture’ by extending their outside seating areas.

Councillor Charmley said: “Some things are going to be popular, some controversial, and others thought provoking.

“This process is about honing our thoughts on which ones are likely to be more deliverable and which ones people think are plain crackers.

“You float your ideas, get the feedback and revise your plans accordingly.

“We are hoping it will be finalised by the end of the year. From that we will aim to secure funding to start delivering some of these schemes.

“The easier ones like Church Street we are doing already and Festival Square is an easy win.

“Bringing Festival Square to life seems to be a really popular through the feedback that we have had, and is certainly something I would like to bring forward.”

Councillor Charmley said the group was open to all possibilities for the old Morrison’s site, adding: “A big part of the consultation will focus on that area.

“With Shropshire Council now owning the building, we have an opportunity to do something different there. What that will be isn’t quite defined at the moment.”

Oswestry mayor Mark Jones said the regeneration of the ‘eastern gateway’ area was “essential” to the future of the town, and praised Shropshire Council for buying the Morrisons site to open up its possibilities.

He added: “We have always thought Oswestry has got a bright future and it has always been a buzzing town anyway.

“You sometimes need a big plan, to do it all piecemeal isn’t always the way forward.”

Adele Nightingale, Oswestry Business Improvement District (BID) manager, said having the masterplan in place would open up the chance to bid for government grants to fund some of the schemes.

She said: “The idea of the masterplan is to collate everybody’s views, everybody’s thoughts on what people like about Oswestry, what they don’t like, what they think can be improved.

“Hopefully by the end of this year all this work will be done, and what will come out of it will be a masterplan. It’s not fixed in stone, but what it will give us is that vision that we can all aim towards.

“Once we have got the plan we can start to plan which projects we can take on first.

“Funding opportunities come from government but they often need an ‘oven-ready’ project. So we will be able to apply for funding and relate it back to our masterplan.”

Ms Nightingale said the masterplan would be far-reaching and cover everything from transport, road infrastructure and accessibility to business sites, education and tourism opportunities.

It will support wider ambitions for the town to eventually be re-connected to the railway network, with disused station building to be re-purposed.

Proposals will be set out for derelict buildings in the town centre, including the former Regal cinema and B-Wise building in Cross street, both of which Shropshire Council hopes to buy.

The document will also put forward plans for a ‘cultural quarter’ around the castle and Bailey Head, as well as improved cycle infrastructure and bus connections between the town centre, Maesbury Road Industrial Estate, and the sustainable urban extension (SUE) and Innovation Park at Mile End.

FOG is encouraging Oswestry residents, visitors and business owners to have their say on the plans.