Beighton in 'good nick' despite missing out on Tokyo 2020 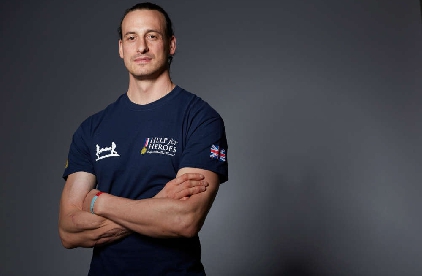 The great poet Rudyard Kipling would be proud of former Army Captain Nick Beighton, from Shrewsbury.

Having fought back from a life-changing injury in 2009 to appear at the Paralympics of 2012 and 2016, canoeist Beighton, 39, is phlegmatic about narrowly missing out on selection for the Tokyo games which start next month.

He said: “I wouldn’t say I was devastated. There’s certainly a disappointment that I didn’t make it, but I’m at peace with that. That’s sport, ultimately.

You can’t always get the result you wish for.

“I’ve just had twin boys too so have four boys now, so there’s other stuff in life that trumps that and puts it into perspective. It does modify the disappointment somewhat. The reality is that it would have been pretty tough if I’d been away for four or five weeks.

“I’m not playing it down, because it’s such an amazing spectacle, but I’ve been to two: I’ve done the incredible home games in 2012, which is never going to be trumped by any other, and I’ve had an amazing cultural experience in Brazil, in 2016, where I won a medal.

“In the end, I didn’t qualify for Tokyo. I went into it giving absolutely everything; I trained as hard as I could and I got quicker. It’s just that somebody else has come in and gone faster than me. That’s sport: everybody wants the same thing and there are winners and losers within it.”

Beighton was injured after stepping on an IED while serving in Afghanistan, which cost him both of his legs. Back in the UK, and in a wheelchair, he quickly decided he would concentrate on para-sport. And, with support from the Help for Heroes sports recovery programme, during his rehabilitation he transitioned his skills to rowing.

Remarkably, just three years after receiving his life-changing injury – and having been accepted onto the British Rowing programme – he qualified for the London 2012 Paralympics in the mixed scull, where he finished fourth.

After undergoing more surgery following the games, he was forced to take a break from sport – although he completed the Paris to London element of the 2013 Help for Heroes’ Hero Ride on a hand bike – and, upon his return, took up para-canoe, which made its Paralympic debut at Rio 2016, where he took bronze in the canoe sprint.

A sanguine individual by nature, Beighton is collecting his thoughts before taking any further steps towards a Paralympic Games.

“I’m reflecting a little bit at the moment,” he said. “I got into the Paralympics stuff straight away after being injured. It involved a lot of stuff I needed in life and delayed some stuff I needed to go through. I’ve done it for 10 years, and you get to a point where you need to consider whether it’s still satisfying those needs or whether I’d just like to try something else.

“Paris is there in 2024, but I don’t think I’m going to carry on for Paris. I think I’m going to look for other opportunities; but I’m such a huge fan of the Paralympic movement – it’s such an amazing thing to be part of – that, absolutely, I would love to go to another games. Maybe, in a few years, I’m in another sport and trying again.

“I enjoy hand cycling; I do a lot of that for fun. Shooting? I’ve done a lot of that in the Military, and I was a pretty good shot. Archery’s another option. There are so many sports out there that I would look at; I haven’t explored all the options yet.”

While it takes strength to serve in the Armed Forces, it takes a different kind of strength to live life beyond injury. Many of the veterans supported by Help for Heroes find their strength through sport. It gives them new purpose and can help heal wounds both physical and mental.

And, although Beighton has achieved success in elite sport he appreciates that, for the majority, sport is enjoyed at grass-roots level – yet the physical and psychological benefits of sport are manifold at all levels, not least for people with life-changing injuries or illness.

He explained: “When you’re first injured, it’s such a traumatic experience to change your outlook and your expectations, whether it’s a real change or simply a change in perception because you don’t know what is possible. Very early on, through organisations like Battleback and Help for Heroes, it was about providing opportunities: the experience, the knowledge and the confidence to say ‘come and try this’ that you wouldn’t necessarily have had yourself.

“They push amazing opportunities to just go and experience stuff. It unleashes a whole load of self-belief and excitement about what you can achieve. In the early days, it’s just fundamental to have those opportunities. That’s what they do so well, with the contacts they have.

“The amazing fundraising the charity does allows them to give people those experiences, like the cycling, and the Invictus Games they’ve supported. And there are even more opportunities now – when I started, we were just making it up as we went along and developing all of those things.

“Everything was in its infancy and the proof of it is what we, as a cohort, have gone on to achieve. It’s created an amazing recovery pathway.”

He continued: “You understand how it could be when you’ve suffered those kinds of injuries and, with the volume of people who came back from recent conflicts with those injuries, it could have gone a very different way.

“Not everyone is high-flying; we’ve all got our issues and demons, but to have those opportunities – and, as it evolved, there were more and more – has definitely had an impact on people’s lives, expectations and mental health.”