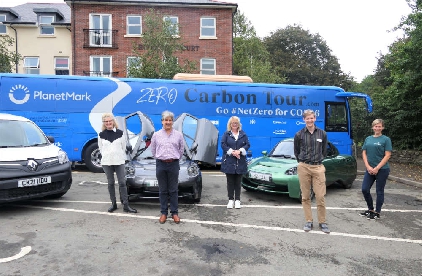 Monmouthshire has become the latest stop for the Planet Mark Carbon Battle Bus as it tours the country in the run up to the United Nations COP26 climate summit, which is being hosted in the United Kingdom this autumn.

The fully electric coach stopped off in Abergavenny yesterday to highlight some of the work being done by the business community to tackle the climate emergency and spread the message about the importance of achieving net zero. Members of the Battle Bus tour were also joined by Riversimple, developers of the ground-breaking Rasa hydrogen vehicles, to talk about their aspirations for carbon-free motoring. It follows the UK-based car manufacturer's work in Abergavenny after the town was chosen as the testbed for their Rasa.

Speaking at the event, Riversimple Communications Director Fiona Spowers said: "Our desire is to eliminate the environmental impact of personal transport with a car that is not only fun to drive, but which doesn't burn fossil fuels and produces on only water as a waste product. The Beta Test of our cars here in Abergavenny will include households, car sharing clubs and public organisations such as Monmouthshire County Council as part of their workplace fleet. We look forward to sharing the fun and pleasure of driving the state-of-the-art Rasa Beta with more Beta Testers throughout the year."

Planet Mark also met with Gwent Energy who have been instrumental in growing the number of EV charging points in the county, as well as efforts to help communities decarbonise their energy supply. The visit also offered the opportunity for Planet Mark to talk to representatives from Monmouthshire County Council about its commitment to reducing its emissions and have the opportunity to view some of the electric vehicles used to deliver local public services like community meals.

Monmouthshire's cabinet member with responsibility for climate change, Councillor Jane Pratt said: "I'm delighted to welcome the zero carbon battle bus to Monmouthshire.  It was a good opportunity to talk about some of the progress we've made decarbonising our own operations and to hear some of the innovative projects being delivered by business in other parts of the UK which we can learn from."

The Planet Mark Carbon Battle Bus tour will now continue on its tour across the UK over 12 weeks, culminating in Glasgow for COP26 in November.