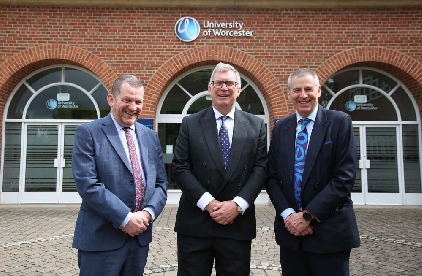 Andrew Manning-Cox, who took office in April, particularly highlighted some of the University's recent developments which he visited, including The Hive, the University of Worcester Arena and City Campus, and their positive impact on the City. His tour also included the Law School and the site of state-of-the-art teaching facilities for health students currently under development at Severn Campus.

Mr Manning-Cox was invited to visit the University to learn about its work and was met by Vice Chancellor and Chief Executive, Professor David Green CBE DL.

"This University is remarkable – a connected and thought through vision which has continued and evolved over time and has such a beneficial impact on all aspects of life in Worcester and Worcestershire and indeed on the national stage," said Mr Manning-Cox.  "David and his team have done a tremendous job. To have the vision to say 'we're going to grow from our Nursing roots and have a new Medical School, and a sports Arena designed with flexible facilities giving the disabled athlete as much priority as others, as well as developing new Departments such as the Law School and the Business School'. And to grow to now more than 10,000 students; well it's a great thing of which the County is rightly proud. It has had a great effect on the economy of Worcester and the whole feel of the City and how it feels about itself."

He said the innovative link up between the University and Worcestershire County Council to jointly fund and run The Hive library had "absolutely put Worcester on the map".

"The Hive is a classic example of inclusivity," he added. "It's always busy, with wonderful learning and recreational facilities. It has students there, members of the public there, it's well used, it's open from 8.30am to 10pm every day of the week, everybody gets on with each other and the costs are shared. Why can't that model be replicated around the country where we have got big libraries only open four or five days a week and reduced opening hours? It's a good example to set many other people. If it can be done here it can be done anywhere with a university."

He said that, alongside Sanctuary Group, which he chairs, the University had also played an important role in revamping the Castle Street part of the City through its City Campus, formerly the Worcester Royal Infirmary building, and its recently opened Art House building. He said this has brought quality jobs and spending power.

"The City can rightly be proud of what has been achieved and with more to come," he added. "Pride in what we do in the County is enhanced by having a successful university."

At over 1,000 years old, the office of High Sheriff is the oldest royal appointment. It is represented in every county in England and Wales, and its history and tradition predate the Norman conquest.

The High Sheriff is the Queen's highest judicial officer in the county. Nowadays the role, which is a voluntary one, involves a range of ceremonial, charitable and community functions as well as support for the Judiciary and public services such as police, probation, ambulance and prison services in the County.