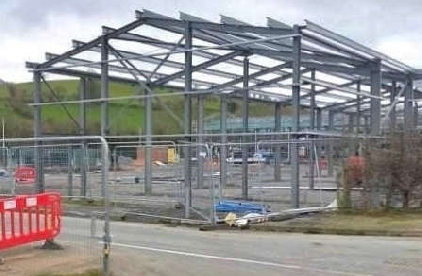 Plans for smaller business units and more parking spaces at Abermule business park have been approved by Powys planners.

The scheme which is next to the controversial £4.3 million North Powys Bulking Facility at the edge of village was given planning permission by the council’s planning committee in February 2021.

The changes will see the floor area of units one to three reduced by four per cent while specifications of the doors to be fitte to units four to nine have also been changed.

Units four to nine will be 20 per cent smaller than first expected.

The application also sees changes made to condition 12 of the 2021 planning permission.

This will see the number of parking spaces at the site increase from 32 to 41.

According to the council the tweaks have been made “to best suit the needs of future occupiers.”

Planning case officer, Richard Edwards said:  “The proposed amendment would reduce the overall scale of the proposed buildings and increase the parking provision on site.

“Parking has been increased from 32 spaces to 41 spaces and still allows for appropriate levels of operational space.

“The proposed changes are considered minor design changes that would not be of a scale that would cause any significant impact different to that of the originally approved scheme and are therefore considered acceptable.”

“Due to the nature of the proposed alterations, it is not considered that the amendments materially alter the approved scheme.”

Originally, outline planning permission had been granted for six business units as well as the Bulking Facility back in the summer of 2018.

Villagers lodged objections against the planning application for nine business units and spoke at the planning committee meeting last year explaining that they believed the plans to be “speculative.”

They also questioned whether there is demand for the units.

Powys said that the development would “develop contribute positively to the economy.”

In March the council received unwelcome news as environment body, Natural Resources Wales rejected their application for an Environment Permit to operate the bulking facility.

The council have said they will appeal the decision.

The site is supposed to receive recycling collected from households across Montgomeryshire, where it will be squashed together  or “bulked,” so that it can be more easily transported to processors to turn into new products.