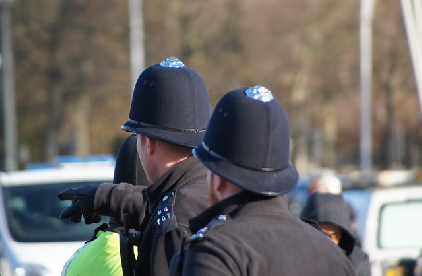 In February 2019, PCs Lee Phillips and Christopher Donovan took immediate action to rescue a man from the river Severn in Shrewsbury.

The officers risked their own lives, using local knowledge, to pre-empt where the man would be swept to. They knew if an attempt wasn’t made to rescue him by forcing entry to the back of a local café, there would be no further locations to rescue him from the fast-flowing river.

On Tuesday 12 October, the officers were honoured for their bravery at the 2020 Police Awards Bravery ceremony in London. There ceremony was due to be held in London last year, however, was delayed due to the pandemic.

Chief Constable Pippa Mills joined the officers at the ceremony and has commended their bravery.

She said: “It was an honour to be able to join PCs Lee Phillips and Christopher Donovan at the Police Bravery Awards. Their quick thinking actions and local knowledge undoubtedly helped save the man’s life and it is fantastic they have been recognised for this.”

The annual Police Bravery Awards, sponsored by Police Mutual, honour some of the finest officers in England and Wales who have performed incredible acts of bravery, while on or off duty.