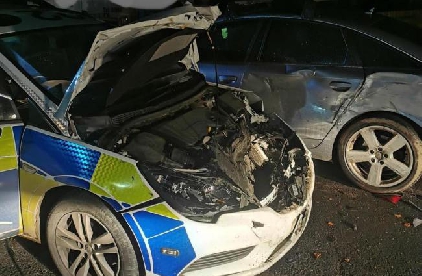 Three people from Ludlow have been arrested after multiple collisions in Leominster this morning.

At around 2am this morning (Friday 16 October) officers were responding to a call from a member of the public regarding anti-social behaviour in Croft Street, Leominster.

While making enquiries the officers heard a loud bang from a nearby road and upon investigation witnessed a vehicle driving erratically and colliding with multiple parked cars, including two police cars. The police cars were significantly damaged however no officers were hurt.

Inspector Mel Reynolds said: “Our officers gave chase on foot and were able to maintain a visual contact with the car which then turned into a cul-de-sac and was cornered by officers and another police car. Three people (one man and one woman, both young teenagers from Ludlow and one man in his late teens and also from Ludlow) were detained in the car and all three were arrested on suspicion of taking without the car owner’s consent, criminal damage and burglary. They were taken into police custody where one of the arrested men assaulted a police officer and was further arrested for assaulting an emergency worker.

“I would like to ask the local residents to please check their property as we are aware of around fifteen damaged vehicles and if you have discovered damage that wasn’t there when you were parked yesterday, please get in touch with us.

“I would also like to praise the courage of all officers involved who recognised such a high risk to public safety and property that they chased a car acting so very dangerously on foot in order to bring the situation to a close.”