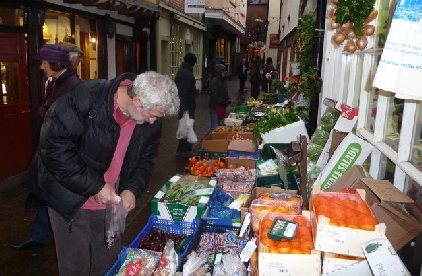 Shoppers will be asked to keep to the left on busy streets and temporary changes to roads will be implemented under plans to enable social distancing and encourage cycling as lockdown restrictions ease.

Shropshire Council leader Peter Nutting has revealed more details of the council’s plans to create a “different atmosphere” in town centres by reducing traffic and prioritising pedestrians and cyclists.

He has also hinted at the possibility of permanent changes in the future.

The temporary measures are to come into force on June 1, when it is anticipated that more shops and businesses will begin to reopen.

Councillor Nutting said the situation would be continually monitored and further changes would be made if needed.

Options are being explored for all towns, with plans for Shrewsbury being finalised and Ludlow next on the list, Councillor Nutting said.

Councillor Nutting said: “We need to ensure there is enough space on footways to ensure safe social distancing even along paths where people are queuing to get into banks, chemists and shops generally, as there are going to be restrictions on the number of people allowed into many shops and shopping areas.

“It is considered that in general there needs to be guidance that people should walk on the left along busy areas such as High Street and Pride Hill and we are likely to put some soft planting and street furniture options in place along the centre of Pride Hill to define the best options for pedestrians.

“There will be increased signage and arrows on footways to help people.

“Castle Street is more difficult and we may need to suspend some loading and parking bays to enable wider footways for pedestrians and we are also considering suspending or restricting the bus lanes to allow more space for cyclists.

“Wyle Cop may need to temporarily become one way with traffic only allowed down the hill and traffic crossing the English Bridge being directed up Town Walls so that there is less traffic on High Street and a different atmosphere for those walking in town.

“All of these measures are temporary and we may consider other experiments over the next few weeks depending on just how busy the town centre becomes. Everything will be monitored on a daily basis and things can be changed very quickly if needed.”

Calls have been made by environmental campaigners to take the opportunity for a more permanent shift towards prioritising active travel and public transport over private vehicles, and Councillor Nutting said the possibilities would be explored when the time was right.

He said: “This is all temporary to see how things work but could lead to more permanent changes once we understand the effects on movement in the town.

“This work is to help the town deal with the present pandemic crisis and longer term measures will be considered in due course.”