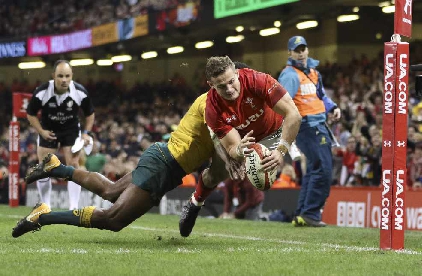 Hallam, a former Head Boy at Monmouth School for Boys, is in Wales' 34-man squad for the summer Tests in Cardiff against Canada and Argentina.

Hallam, who hails from Cross Ash, will be hoping to impress head coach Wayne Pivac ahead of Wales' matches against Canada on 3rd July and Argentina on the 10th and 17th July.

He will be part of the squad's intensive training camp in North Wales before returning to Cardiff for the three Tests.

The 26-year-old, who plays for Cardiff Rugby and is studying Medicine at Cardiff University, will be hoping to shine as the Six Nations Champions continue their preparations for the 2023 World Cup.

Hallam has scored six tries in 23 appearances for Wales since making his full international debut on the wing versus Tonga in November 2013.

He featured in Wales' hard-fought 21-16 triumph against Ireland in Cardiff in the opening match of their successful 2021 Six Nations campaign in February.

Unfortunately, Hallam took a bang on the head in the bruising match, which featured fellow Old Monmothians, Wayne Barnes and Eddie Butler, as the referee and BBC commentator, respectively.

Hallam made his professional debut, aged 17, for Dragons against Wasps in the Anglo-Welsh Cup in October 2011. He was a member of Wales' Rugby Sevens squad for the 2018 Commonwealth Games in the Gold Coast.