Council hopes to open drop-in shops across the county 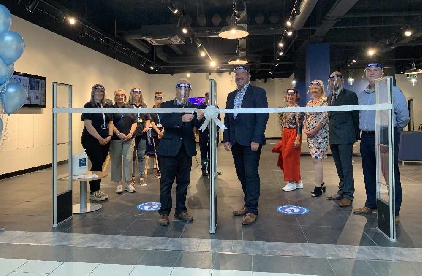 Council ‘drop-in’ shops could soon open across the county following the launch of a pilot service in Shrewsbury.

Shropshire Council has turned the former Disney store in the Darwin Shopping Centre into a customer service point as part of a shake-up that will mean its headquarters, Shirehall, which has been closed to the public since the start of lockdown, will never fully reopen.

Under plans to move out of the building completely by 2023, the council has said it wants to increase its presence in Shropshire’s town centres to make it easier for people to access services.

Speaking at the official opening of the Shropshire Local shop, which underwent a ‘soft launch’ last week due to continuing coronavirus restrictions, incoming chief executive Andy Begley said: “The idea stemmed from during lockdown.

“We have had to restrict the use of Shirehall significantly but also wanted to make sure the public has a way of interacting with us and this is a new way of doing that.

“The idea is that you can come in and have a conversation with us in perhaps a less formal way and we can help you then interact with the council more digitally.”

The shop has been kitted out with touch screens which members of the public can operate themselves to use the council’s website, or speak to one of the advisors for assistance.

Mr Begley said: “Just from the feedback this week it has been really positively received, we have had lots of great comments.

“It’s fair to say it’s a pilot and we are learning all the time about what will work and what won’t work. It has helped us to test our website and accessibility and there have been examples this week of things not working properly and the IT team has been able to fix them straight away.

“At the moment we know this is in Shrewsbury, but this is a pilot and we will soon look to other towns across Shropshire.”

Council leader Peter Nutting said the drop-in was a better and more accessible customer service point than Shirehall had ever been.

He said: “We are very conscious that Shirehall has never been very public -friendly.

“If the council is changing and moving to the town centre then we need a public place and I think this is ideal.

“If people want to understand a planning application or report a pot hole, or access any council service, they can come here.”

Project manager Ruth Middleton said: “Andy wanted to come up with a way that we can better provide services to the community.

“We haven’t been able to have our offices open and that’s going to be the case for a while, so we wanted to have a point where people can come and get things done, ask questions and access our services.

“The staff were either based at some of our customer service points or Shirehall and they are loving just being out and seeing customers. It is really nice to get back to some kind of normality.

“It’s a good opportunity to engage with with people who might not have spoken to us before. People have been stopping by the shop and asking what we’re doing.

“That is potentially where we can evolve as an organisation.”

Councillor Nutting said the council was hoping to open similar drop-in centres across the county, using buildings already owned by the authority – including Castle View in Oswestry, the former borough council offices, and Ludlow Assembly Rooms, which is set to reopen early next year following a multi-million pound refurbishment.

“We are hoping to have the same sort of venue around the market towns,” said Councillor Nutting.

“We already own buildings in Oswestry, Ludlow, Bridgnorth, and we will be opening similar units there.

“We are hoping to get the one in Oswestry open quite quickly.”

The Shrewsbury shop is open six days a week, from 9am to 5.30pm from Monday to Friday, and from 10am to 4pm on Saturday.