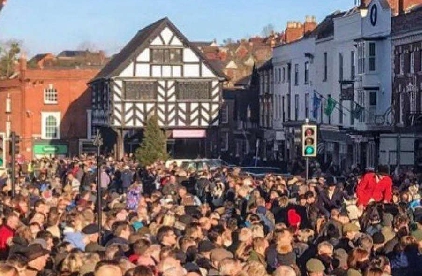 The traditional Boxing Day hunt meet in a Herefordshire town could be blocked this year, depending on the outcome of what is expected to be a heated meeting tomorrow night.

Ledbury Town Council’s clerk said it had received “a number of” emails and Facebook messages calling for it to prevent the Ledbury Boxing Day Hunt, by asking for the county council not to permit the necessary road closures.

Town councillors are recommended to “give consideration to the request not facilitate (the meet) in any way”.

A Facebook post by the Ledbury Hunt, which has garnered nearly 300 “likes”, says: “Every year, for as long as ANYONE can remember, the

Ledbury Foxhounds have met in Ledbury Town Centre on Boxing Day, supported by HUNDREDS of people.

“This is under threat from a very small minority of people.”

It urged supporters to email both the town and county councils ahead of the meeting.

Meanwhile, John Rose, who runs the Ledbury Anti Fox Hunt Group, has also urged those opposed to the hunt to contact councillors.

Also taking to Facebook, he wrote: “I have forwarded (Herefordshire Council leader David) Hitchiner evidence of illegal hunting by the Ledbury Hunt in the form of reports, videos and photographs.”

But a reply from Coun Hitchiner said: “Provided our highways team are correctly notified of any request for a road closure, and provided any proposed regulated activities are covered by a temporary event notice, then this local authority cannot object to these meetings, regardless of the individual views of the elected members.”

Coun Hitchiner added: “We obviously expect all hunts to be totally compliant with national legislation, which is regulated by the police and not the council.”

Foxhunting was outlawed nationally in 2004, but trail hunts, following a similar format, are still permitted and held regularly by the Ledbury Hunt and other hunts.

On November 11 the Malvern Hills Trust board of trustees “expressed concerns over the number of infringements of its trail hunting policy and trust byelaws over the past four years” and voted to suspend licencing of all trail hunting on its land indefinitely.

Within the 1,200 hectares (3,000 acres) of the Malvern Hills and the adjacent commons managed by the Trust are Castlemorton Common, Hollybed Common and hill land south of Wynd’s Point, which are within the Ledbury Hunt’s “country”.

The National Trust and Natural Resources Wales also announced last month they would ban all trail hunting from their land.

All three organisations cited the recent prosecution of Mark Hankinson, former director of the Masters of the Fox Hounds Association (MFHA), the governing body of trail hunting, for encouraging the use of legal trail hunting as a screen for unlawful animal hunting.

The Ledbury Boxing Day Hunt was cancelled last year due to Covid-19 restrictions.