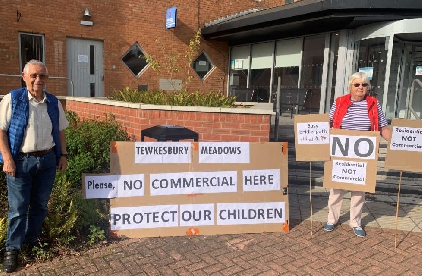 Borough planners have given the go-ahead to Bloor Homes’ controversial plans to build their new regional offices near Tewkesbury.

More than 420 people including the Tewkesbury MP Laurence Robertson had opposed the scheme to build a £5m new two-storey office on land south of Jenny’s Field off Nightingale Way in Walton Cardiff.

The building will have a gross floor area of 18,212 sq ft and will become the new regional office for Bloor Homes who are seeking to relocate from their existing offices at Furrowfield Park, Tewkesbury.

The building has been designed to be made of red bricks and metal cladding with a slate roof and will include solar panels to the southern roof slope.

The plans include planting a belt of trees to the southern boundary and there would be 66 car parking spaces to the southern and eastern part of the site, with a grasscrete overspill area for a further 20 vehicles.

However, more than 50 local residents had objected to the scheme along with the local MP and a petition against the scheme had attracted more than 420 signatures.

Mr Robertson said in a letter that the plans would “impact on locally significant views and would represent an encroachment into the surrounding rural landscape”.

He also said local roads would not be able to manage the increase of more than 70 extra vehicles travelling to and from the site.

He said there were many reasons to refuse the proposals and it was not a case of nimbyism.

“I ask you members, to reject the application,” he said.

“And that you feel this would be better used for the community.

“Please, unanimously reject this application this morning and show that you have listened.”

Nick Rawlings, planning director at Bloor Homes Western, said there were no technical objections to the plans at all.

He said traffic to the site would be spread out due to the company’s flexible working arrangements and they also have conduct procedures to ensure staff keep to the 20mph speed limit.

“The last thing we would want to do is compromise highway safety on Bluebell Road for local residents,” he said.

Cllr Philip Workman (Ind, Tewkesbury North & Twyning) said he could not support the plans as local residents had been misled.

“It seems that Bloor Homes when people were buying the houses around there, misled them into the use of this land,” he said.

“They weren’t expecting it to be commercial. And let’s face it, it’s just not appropriate in that position.

“It’s a great disappointment for the residents there who were told there would be a different use for this land and now they bought the houses they are left with this.

The plans were approved by ten votes to five.