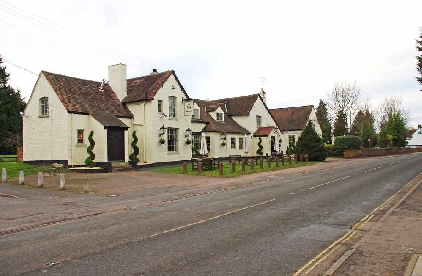 © Copyright P L Chadwick and licensed for reuse under this Creative Commons Licence.

Huge plans to renovate a popular country pub have been put forward.

Major brewers Greene King have revealed plans to refurbish the Crown Inn in Hallow near Worcester including a bigger bar and toilets as well as to transform the garden and outdoor seating areas with a new covered pergola and pods for alfresco dining.

An extension would be built to the back of the grade II-listed pub to house the expanded bar and provide space for 29 more covers with the pub’s outdoor bar demolished and a large Manna Ash tree cut down to make way for the proposed work.

Outdoor seating will be moved to a different part of the pub’s garden with new hedges and fencing put in place.

The pub’s log burner fire would also be replaced with an open fire.

The Crown Inn was run by Will and Sacha Donaldson for more than a decade but the lease, which ran out in February, was not renewed by landlords Greene King which decided to move ahead with its own renovation plans.

The couple said they had fought the decision with their solicitors but was left with little to do as it was Greene King which had the final say over the renewal of the lease. The pub went through a significant refurbishment and rebrand – including the appointment of a new head chef – in 2017.

A statement included with the application said: “Principal areas of this proposal include the removal of the external timber frame bar cabin structure to create space for the small flat roof extension within the existing kitchen courtyard.

“The extension would allow the trade area to be extended by relocating the internal bar and allowing the trade space to access the garden providing natural light into the heart of the pub.

“The existing garden terrace has two large umbrellas that have been relocated to a new hard standing terrace formed in the existing rear lawned area.

“The space now vacated by the relocation has provided space for a new timber framed pergola providing a feature covered seating area adjacent to the new flat roof extension.”

The new plans can be viewed via the planning section of Malvern Hills District Council’s website. The application number is 21/00392/FUL. Public consultation ends on May 7.