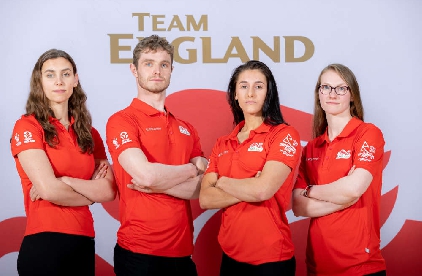 Team England has announced a further 38 athletes as part of the Swimming team for the home Commonwealth Games in Birmingham this summer. Following January's initial team announcement of 10 athletes. The newly announced names complete a 48-stong team of Swimming and Para Swimming athletes.

The team comprises of a variety of former Olympic, Paralympic and Commonwealth medallists, alongside many athletes who are set to make their Commonwealth Games debut. The swimmers will look to 'Bring it Home' at The Sandwell Aquatics Centre from 29 July to 3 August.

This summer, Team England will comprise of over 400 athletes in total, all of whom will look to capitalise on the once in a lifetime opportunity to bring home success in their own country. The swimmers announced today to represent Team England in the pool are:

The para swimmers to represent Team England are:

Team England's swimming team was second on the medal table at the 2018 Gold Coast Games with a total of 24 medals. This included 9 gold, 10 silver, and 5 bronze medals.

On being selected for her first Commonwealth Games, Paralympic medallist Rebecca Redfern from Worcester said: "It's really exciting, to have a home Games that's so close to my home as well my family can come and watch and support, it'll be really exciting for my little boy to come and see Mummy swim for the first time and especially compared to Tokyo having a crowd back is really exciting, having fans back creating noise and excitement.

It's the first time I've competed at an integrated Championships with both para and able-bodied athletes as well so that's really exciting to train, live and compete together as one team so that we can learn from each other. I'm really honoured to be part of the team and so excited for it to start."

Glasgow 2014 Commonwealth Games Team England member, Jay Lelliott said: "So I have goals and this is the first stage of my goal, but it's also a huge relief to get through this period because I know what I'm capable of, but obviously the first hurdle is you can turn up [at British Championships] in the best shape of your life and if two or three people beat you you're out of contention so it's all about turning up and being in the best shape possible. It's such a relief but I'm now so excited to get my head down for the Commonwealth Games in the summer now.

I've got so many great people back at home, all of my squad at the City of Sheffield Swim Club are so excited, my partner Abby was over the moon for me, my family and all my friends knowing about it has been such a heart-warming time and so I feel like I'm not just doing it for me, though I swim for me I feel like I've also got the whole of my team that helped me get to this point and that's just such a rewarding feeling to get there not just for me but for them as well."