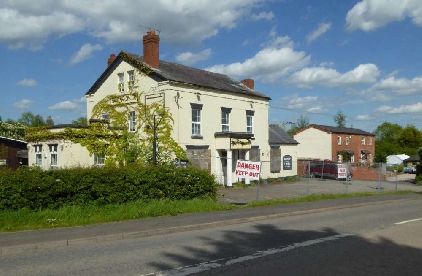 © Copyright Philip Halling and licensed for reuse under this Creative Commons Licence.

Villagers have said they would rather keep their pub as part of objections to a new housing plan.

New proposals would see the former Pheasant Inn in Welland near Malvern converted into flats with a new extension built to house a restaurant and café, bar and function room.

Dozens of villagers in Welland have objected to the plans saying they do not want to see more housing in the village and want the pub to re-open.

Linton Seabrook of Marlbank Road said: “The village is in desperate need of a public house at its heart.

“This application essentially boils down to converting the existing pub into accommodation, something that Welland now has in abundance with four large housing developments in recent years.”

The village pub has been vacant for 11 years and attempts to reopen the pub alongside new housing have been rejected by Malvern Hills District Council which has led to the new plan for a new restaurant, café and bar.

Skye Brunt of Confield Close said: “This is not a ‘pub’, this is a block of flats with a small cafe and even smaller bar attached to it.

“This is not what the village needs nor wants with a perfectly good existing cafe and meeting room in the centre of Welland.

“What the village needs is a central family pub providing reasonably priced food and drink for residents to meet and enjoy.”

Daniel Saunders of Kingston Close said: “Originally signed my support for this believing it was a planning application to bring back a pub. However, it turns out that this is actually a disguised attempt at turning the building into flats.

“Flats are not in keeping with the area, they will limit parking forcing people to park on the road at a dangerous junction. We do not need another meeting area as we have the village hall. What the area needs is a community run pub.”

A plan to convert the vacant building into homes and reopen the pub inside a new extension was controversially rejected by Malvern councillors in 2019.

The pub has been vacant since 2010 and has been the subject of numerous planning applications.

Councillors approved plans to build 14 homes on some of the land off the village’s Drake Street in 2017 – proposals that included the retention of the pub – which have now been built.