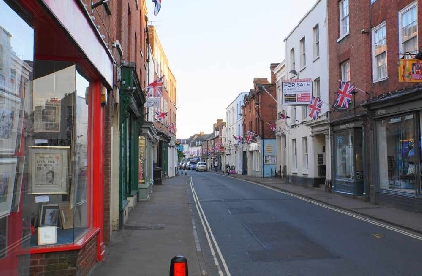 © Copyright Bill Boaden and licensed for reuse under this Creative Commons Licence.

A call has been made to downgrade a busy town centre road to stop lorries from damaging historic and listed buildings.

Old Street in Upton, which runs through the town before joining the High Street, is currently classed as an A road but a local councillor has led a call for the council to look at making it a B road to reduce the amount of traffic whilst also preventing damage to some of the town’s most historic buildings.

Cllr Paul Middlebrough, who represents Upton on Worcestershire County Council, said there had been “great concern” in the town that lorries and heavy goods vehicles (HGVs) as well as the amount of traffic on the narrow road were damaging listed buildings.

“There is a great deal of concern in Upton upon Severn that Old Street is a road, with a narrow carriage way and narrow pavements, that has the inappropriate designation as the A4104,” he told councillors at a full council meeting last Thursday.

“Listed and historic buildings, both residential and commercial, front onto the road and given the size of modern HGV’s there is concern that their fabric is being damaged by the trundling and rumbling of traffic.”

Cllr Amos, cabinet member for highways at the county council, said there was a “basis for a constructive investigation” to downgrade the road but work would unlikely start immediately due to the council’s “massive” workload.

“This is clearly an issue which merits investigation in the light of the concerns from residents and others,” he told councillors.

“I would suggest that the best way forward is to facilitate a meeting with [Cllr Middlebrough] and highways officers to review the situation and consider the alternative and possible options.

“The A4104 forms part of the primary route linking Upton and Ledbury.

“Questions therefore to be discussed could include the diversion of HGVS, the impact on historic buildings and road surface, the implementation of a weight restriction, the number of HGV-related injury collisions, police injury collision data and the consequences of any diversion route.”