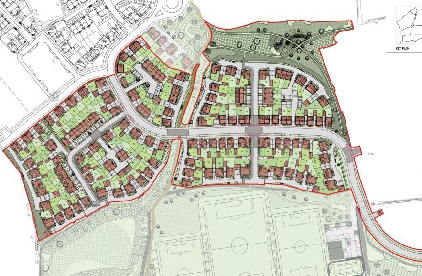 More than 150 homes have been given the final sign-off as part of plans to build a new 750-home estate on the edge of Gloucester.

Tewkesbury Borough Council’s planning committee gave the go-ahead to build 154 homes in Twigworth by a majority of three on Tuesday.

And the reserved matters for 74 homes on Yew Tree Farm, also in Twigworth, was deferred as it “did not accurately represent the number of park homes”, a council officer said.

The large new development in Twigworth was backed by the then-Communities Secretary Sajid Javid in December 2017 after the proposal was sent to the planning inspectorate.

The proposal – to build 725 homes, a primary school and retail units – was originally drawn up by developer Robert Hitchens Ltd but ha ssince been taken over by Bovis Homes.

The homes form part of a plan which would effectively link Innsworth and Twigworth together as 1,300 homes north of Innsworth Lane are set to be built.

The Twigworth development will cost £195million and will include 471 homes ranging from two to four-bedroom houses, and 254 homes will be made affordable.

The plans, which were first submitted in July 2015, went to an appeal after Tewkesbury Borough Council had not considered the application for 18 months.

Residents had raised concerns about the development’s impact on traffic and drainage at the time.

But on December 21, 2017, planning inspector Philip Barber granted permission to the two outline applications as authorised by Mr Javid.

The plans from part of Gloucestershire’s Joint Core Strategy – the masterplan to build 31,824 new homes in the county by 2031.