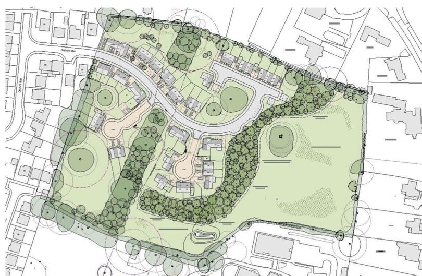 A developer’s third bid to build a housing estate on an “undisturbed haven for wildlife” in Cheltenham has been recommended for approval.

Housebuilder William Morrison and the Carmelite Trust will take their third proposal to build a new housing estate on land off Oakhurst Rise, in Charlton Kings, to Cheltenham Borough Council’s planning committee this week.

In 2018, 90 homes were refused before the number of properties were scaled down in a second proposal – 69 in 2019 – which was again denied planning permission.

William Morrison Ltd and the Carmelite Trust then lost an appeal to build the 69 homes last year following a decision from an independent Planning Inspector, whose main concern was the impact on nearby heritage assets Ashley and Charlton Manors.

Hundreds of people have voiced their opposition and support for the revised scheme for 43 new homes, which district council officers have recommended should be approved.

The development would be next door to St Edward’s Preparatory School, and would consist of a mixture of one-bed apartments, two-bed, three-bed and four-bed houses.

According to a council document, the site is “heavily constrained” due to a number of protected trees and wildlife species, and its close proximity to Manors which are listed buildings.

Local group Friends of Charlton Kings, which has more than 1,600 members, has objected to the proposal over concerns of ecology while Charlton Kings Parish Council said the application “does little to address any of the committee’s concerns”.

In total, there was 248 representations made for and against the proposal.

Of the 108 in support, people said there was a need for homes and affordable housing in Cheltenham, that there would be a biodiversity net gain and the scheme is “well-designed with plenty of open space”.

However a number of the letters of support for this application are from properties outside of the district, the council report said, with some letters coming from postcodes as far as London.

Of the 140 against the proposal, residents were concerned about the impact on wildlife and protected species and loss of green space.

One Charlton Kings resident said the field is “an undisturbed haven for wildlife” and the impact on local dentists, schools and GP surgeries would be “worsened”.

They said: “The impact on amenities in the locality would also be worsened by this proposal.

“Our understanding, from waiting lists, is that there is already pressure on the GP surgery, the dentists and local schools to meet the needs of local residents.

“Finally the proposed development would cause considerable loss of habitat for the small gain in housing.

“Over the lockdown period we have naturally spend a great deal more time in our garden and have seen many different animals entering from the safe haven of the fields adjacent to our property.

“When we have walked into the field we have also seen varied flora including oxeye daisies, bluebells, cowslips, campions, oxslips, field buttercups, bugle and alkanet to name just a few of the meadow flowers in this undisturbed haven for wildlife.”

A borough council officer said in the report that since the appeal was determined last year, the Cheltenham Plan housing blueprint allocates the site for housing was approved and the proposal should be given the go-ahead.

The report said: “Since the appeal was determined the Cheltenham Plan has been adopted which allocates the site for housing. Members will be aware that decisions must be taken in accordance with the development plan unless there are material considerations that indicate otherwise.

“This has led to a number of changes to the proposal as outlined above including the reduction in number of houses, reduction in developed area, retention of open space, introduction of additional landscaping in indicative plans, improvements to biodiversity protection and mitigation and greater retention and protection of trees.”

Cheltenham Borough Council’s planning committee will determine whether to grant planning permission on September 17, from 2:30pm.