Changes to ambulance cover in Powys are explained to councillors 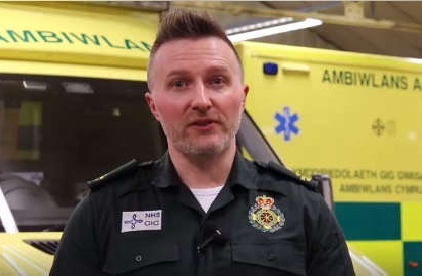 Following a review, an increase of ambulances will be seen in Powys as Ambulance chiefs revealed their plans to councillors.

Wales Ambulance Service Trust (WAS) chief executive Jason Killens and operations manager for Powys, Ben Collins gave details of the new approach to working in the county at a Powys County Council meeting on Thursday, September 24.

Back in July a motion put forward by Plaid Cymru and warned of potential cuts to the service in Powys.

Last month a delegation of Powys councillors and the chief executive of WAS, Jason Killens met to discuss their concerns.

Mr Killens gave a national position explaining the “extreme pressure” the service had been experiencing over the last couple of months.

Mr Killens said: “This summer we have been experiencing much more activity than we would expect to see driven in part for us in Wales particularly in coastal areas by staycations.”

“This led to workloads being 30 per cent above what would normally be expected.”

The pandemic is also adding to the burden as Mr Killens explained they were receiving more calls and also having to deal with staff who are sick or having to isolate due to coronavirus.

Mr Killens told councillors hospital “handover” was also causing a problem as delays in taking people from ambulances into hospital are increasing.

Mr Killens said: “These three things coming together are leading to significant pressure for us.”

Wales Ambulance operations manager for Powys, Ben Collins explained the changes that are being made in Powys following a review of provision which will see more ambulances in the county.

“It’s about getting that additional into the right times where we are expecting higher call volume.”

Mr Collins explained that during the highest call hours of 8am to midnight between five to eight ambulances could be on call in Montgomeryshire while in the quieter period of 2am to 7am there would be three.

He added that staff were now staggering shift start times.

Mr Collins said: “We don’t want all crews starting at 7am and finishing at 7pm.

“By staggering by half an hour across the stations this gives us a more robust response model.”

“Machynlleth will remain 24/7, Llanfyllin and Llanidloes will both have two ambulances covering peak times, between 8am to 2am and an additional ambulance will  be in Newtown covering the peak times.”

Further down in Radnorshire, Mr Collins explained that three extra ambulances will cover at peak times from 0800 and 12am taking numbers up to nine,

This means that Builth Wells will have an ambulance, Knighton will have two and Llandrindod an extra one for peak times.

Mr Collins said: “Alongside the review we are in talks with the Powys Teaching Health Board to come up with a rural health care model.”

He added that fire service first responders had been reintroduced and that they were they were planning to increase the number of volunteer first responders in the community, to provide “greater resilience and earlier first aid and life support care.”