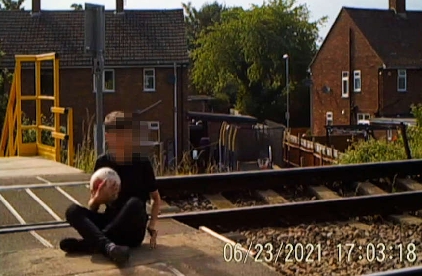 Network Rail has released alarming footage of children playing near live railway lines in Worcestershire as a warning to local families during the summer holidays.

With most children now off school until September, parents and guardians are being urged to make sure their young ones know the dangers of the railway and understand why they should never trespass on the tracks.

The warning comes after cameras repeatedly filmed children loitering and playing on Jamaica Road level crossing in Malvern, on the line between Hereford and Worcester.

More than 70 trains use the crossing each day travelling at speeds of up to 70mph.

Over just nine days in June the cameras filmed ten incidents of children risking their lives - ranging from not stopping, looking or listening before crossing, loitering for lengthy periods on the tracks, sitting down while taking part in dares to leaving items of clothing on the rails.

Rhys Evans, level crossing manager at Network Rail, said: “The footage we’ve captured at Jamaica Road is concerning and shows that local children still aren’t aware of the potential dangers of trespassing on the railway – despite our hard work to educate the local community on level crossing safety.

“Our message to parents and guardians is to please warn your children that the railway is not a place to play. It’s absolutely vital that everybody remains vigilant when crossing the railway as trains are fast, frequent, and quieter than ever.”

Francis Thomas, from West Midlands Railway, said: “Railways are not playgrounds. Trains can not swerve, nor can they pull-up suddenly. If you are not on a train or in a station – quite simply, you shouldn’t be on the railway.”